Jerome Fellow Mia Chung is working on her untitled Korean War musical at the Playwrights’ Center this week, in partnership with Nautilus Music-Theater. She is collaborating with director Ben Krywosz; music director Jill Dawe; composer Marc Chan; and actors Sara Ochs, Eric “Pogi” Sumangil*, and Joel Liestman* (*Member of Actors’ Equity Association). Get to know Mia a bit in this mini-interiew:

You travel a lot. How much does travel influence your work?

I find it useful to encounter different worlds and social mores and perspectives and assumptions on a regular basis. You can see more clearly and quickly what is universal and common to the human experience, as well as how differently cultures may interpret and express common impulses.

Travel can also help me focus and be present for a project or an idea for short, intense periods of time.

You For Me For You ran last year at the National Theater of Korea. How was the play received? Did you notice a difference in how Korean, American, and British audiences react to the play?

What I found really revealing and quite moving is that each audience has found itself in the play. People in Seoul asked me if I drew on Korean folk tales to come up with the talking well, the talking frog, the rice orchestra, etc. People in London asked me if Minhee’s fall down a well was inspired by Alice’s tumble down a rabbithole in Lewis Carroll’s Alice in Wonderland. People have also asked me if I was inspired by Haruki Murakami’s The Wind-Up Bird Chronicle, which also features a well that gives way to other dimensions of space and time. The honest truth is that none of those influenced me. I have only recently read the Murakami novel because of the question was posed to me. I never considered the obvious parallel with Alice in Wonderland. And I’m seriously behind on my knowledge of Korean folk tales. My intention was to tap into elemental human motivations and impulses, as well as to push my imagination to travel widely. It is reassuring, in a way, that I stumbled on literary images and tropes that are, frankly, universal.

Staring at the offer of a menu board at an Au Bon Pain of a Sriracha Chicken Sandwich.

Finish this sentence: If I weren’t a playwright I would be …

Going around helping people minimize the material stuff in their lives. I find that quite satisfying and freeing. 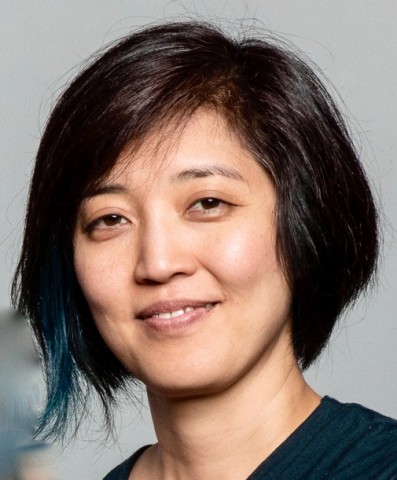