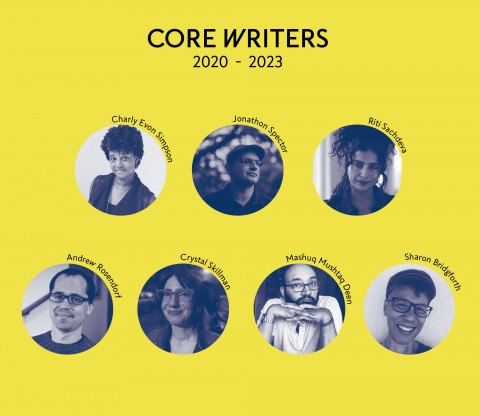 MINNEAPOLIS (May 18, 2020) — The Playwrights’ Center is continuing its commitment to developing playwrights and new work through their Core Writers program. Seven of the country’s most thrilling playwrights are joining the program. The 2020-2023 Core Writers are Sharon Bridgforth, Mashuq Mushtaq Deen, Andrew Rosendorf, Riti Sachdeva, Charly Evon Simpson, Crystal Skillman, and Jonathan Spector.

"I am so excited to welcome back Andrew and Riti to the Center as well as welcome Deen, Charly, Crystal, Sharon and Jonathan—all of whose work I have deeply admired for a long time" said Producing Artistic Director Jeremy B. Cohen. “They are all incredible writers, and I look forward to seeing each of them grow as artists over the next three years.”

Each year, the Playwrights’ Center serves as an artistic home for over 40 playwriting fellows and Core Writers, in addition to supporting 2,200+ member playwrights across the globe and partnering with producing theaters to move work from page to stage.

“To be a Core Writer of the Playwrights’ Center has been a life-long dream,” said Core Writer Crystal Skillman. “As a playwright who is also a musical and TV writer, this allows me a safe haven to have a theatrical home for my new plays. It will also allow me to share these plays with theaters across the country and world, helping me make the work as strong as it can be."

“I am deeply honored to have the privilege of being supported by the Playwrights' Center. To be a Core Writer means that I do not have to work in isolation. That I will be asked, ‘what do you need’ as the writing shapes itself. And that I will be fiercely championed by an organization that loves playwrights. This is a return home for me. It feels Divine. I am SO grateful!” exclaimed Core Writer Sharon Bridgforth.

Andrew Rosendorf exclaimed, “I’m excited to be returning home to the Playwrights’ Center, to be supported for three years by an organization whose sole purpose is to foster and nurture artists, their voices, their work—all something I know firsthand. It’s a gift to be part of this community as well as a guiding light in this moment in time when we need nourishment for our souls more than ever.”

The Core Writer program at the Playwrights’ Center supports playwrights who demonstrate a sustained level of accomplishment, commitment, and artistic excellence, giving roughly 25–30 of the most thrilling playwrights from across the United States the time and tools to develop new work for the stage. During their three-year tenure, Core Writers receive play development workshops at the Center, have the opportunity to be part of the PlayLabs festival or the Ruth Easton New Play Series, and connect with an extensive network of producing theaters. Designed to meet the particular needs of both emerging and established writers, the program’s significant resources have further developed many playwrights’ careers. Joining our Core Writers program are:

●  Sharon Bridgforth is a New Dramatists alumnae and host of the "Who Yo People Is" podcast series. Sharon has received support from Pillsbury House Theatre, Creative Capital, MAP Fund, the National Performance Network, and the Doris Duke Performing Artist Award.

●  Riti Sachdeva is a recipient of the Kennedy Center ACTF Quest for Peace award and Sultan Padamsee award for her play Parts of Parts & Stitches and a Theater Communications Group/Mellon Foundation travel grant to begin adapting her play Suicide Seed to the kathakali dance-theater form. Her play The Rug Dealer made the 2016 Kilroys List.

●  Charly Evon Simpson’s plays include Behind the Sheet, Jump, form of a girl unknown, it’s not a trip it’s a journey, and more. She has received commissions from MTC/Sloan, The New Group, EST/Sloan, Cleveland Play House, and South Coast Repertory.

●  Crystal Skillman is an award-winning dramatist whose plays include Open (The Tank/AFO), Geek (Vampire Cowboys), Cut (Theatre Under St. Marks), as well as Pulp Vérité (Kilroys List), and Rain and Zoe Save the World (EMOS Prize). Her new play with music, This Show Is Money (Music/Lyrics Gaby Alter), is currently being developed in The Civilians R & D Group.

“Because the Core Writer program is a three-year program, I have an opportunity to build and sustain artistic, personal, and professional relationships with the Playwrights’ Center community,” said Riti Sachdeva. “Continuity with theater professionals is difficult because we all tend to move on to the next residency, cohort, production, workshop, etc. Three years with the Center means an opportunity to create deeper bonds with collaborators and mentors.”

Photos of the artists are available here at https://bit.ly/2yNnwff.

Sharon is producer and host of Who Yo People Is, a podcast series that gives space to artists whose Work and artistic practices are rooted in serving our communities through healing/Spiritual and cultural traditions—centered in Love. Sharon’s publications include: love conjure/blues and Lambda Literary Award-winning the bull-jean stories. Sharon is co-editor, with Omi Osun Joni L. Jones and Lisa Lynn Moore, of Experiments in a Jazz Aesthetic: Art, Activism, Academia, and the Austin Project. Sharon’s River See Theatrical Jazz Performance Installation script is published in Obsidian Literature & Arts in the African Diaspora, Issue 43.1; delta dandi, is published in solo/black/woman: scripts, interviews and essays; and The love conjure/blues Text Installation is in Blacktino Queer Performance.

As a performance maker and cultural worker, Riti Sachdeva has been creating art in some shape, pattern, or rhythm for over 25 years. Incorporating text, installation, song, and dance into her writing and performance, she straddles the practices and conventions of traditional U.S. theater, performance art, and international approaches to theater. Interweaving the personal, political, and arcane, she has crafted the singular Indo-Gothic aesthetic of her work.
Playwriting fellowships include: the Dramatists Guild Fund, which awarded her the 2019 Thom Thomas playwriting award; The Public Theater’s EWG; WP Theater Lab; Ingram New Works Lab; and New Georges. She is recipient of the Kennedy Center ACTF Quest for Peace award and Sultan Padamsee award for her play Parts of Parts & Stitches and a Theater Communications Group/Mellon Foundation travel grant to begin adapting her play Suicide Seed to the kathakali dance-theater form. Her play The Rug Dealer made the 2016 Kilroys List. Additionally, plays have been developed by Phoenix Theater, Working Theater, CenterStage, The Civilians, the Playwrights’ Center, NNPN, U of Hawai’i, and Lincoln Center Director’s Lab.

Charly Evon Simpson’s plays include Behind the Sheet, Jump, form of a girl unknown, it’s not a trip it’s a journey, and more. Her work has been seen and/or developed with Ensemble Studio Theatre, The Lark, P73, The Eugene O’Neill Theater Center, PlayMakers Repertory Company, Chautauqua Theater Company, Salt Lake Acting Company, and others. She is a recipient of the Vineyard Theatre's Paula Vogel Playwriting Award and the Dramatists Guild's Lanford Wilson Award. She has received commissions from MTC/Sloan, The New Group, EST/Sloan, Cleveland Play House, and South Coast Repertory. Charly is currently a member of WP Theater’s 2018-2020 Lab and The New Georges Jam. She’s a former member of SPACE on Ryder Farm’s The Working Farm, Clubbed Thumb’s Early Career Writers’ Group, Ensemble Studio Theatre’s Youngblood, and Pipeline Theatre Company’s PlayLab. She received her BA from Brown University, a master’s in Women’s Studies from University of Oxford, New College, and her MFA in Playwriting from Hunter College. www.charlyevonsimpson.com

Crystal Skillman is an award-winning dramatist. Plays include NYTimes Critics Picks Open (The Tank/AFO), Geek (Vampire Cowboys), Cut (Theatre Under St. Marks), as well as Pulp Vérité (Kilroys List), and Rain and Zoe Save the World (EMOS Prize). Her new play with music, This Show Is Money (Music/Lyrics Gaby Alter), is currently being developed in The Civilians R & D Group. Crystal is the book writer of the musical Mary and Max  (Composer/Lyricist Bobby Cronin), which just had its European premiere and recently live-streamed to great acclaim. Postcard American Town, with Composer/Lyricist Lynne Shankel, is currently a finalist for the 2020 SDSU New Musical Initiative. A two-time finalist for the McKnight Fellowship, Crystal has been granted two Alfred P. Sloan commissions, received a Clifford Odets Ensemble Play commission, and won the NY Innovative Theater Award for Outstanding Play (The Vigil or The Guided Cradle). She has cut her teeth in playwriting groups such as Youngblood, Soho Rep’s Writer/Director Lab, WP Lab, and is a member of Ensemble Studio Theater and Rising Phoenix Rep. This summer she will work on two commissions: Seen and The Rocket Men. TV/Comic Books include: Adventure Time (Boom! Studios), Eat Fighter (WebToon), and Overnight Success (Kampfire Films). https://www.crystalskillman.com/

Jonathan Spector is a playwright and theater-maker based in Oakland, California. His play Eureka Day premiered at Aurora Theater in Berkeley and received all of the SF Bay Area’s new play awards: Glickman Award, Bay Area Theatre Critics Circle Award, Theatre Bay Area Award, and Rella Lossy Award. It then had a sold-out run in New York with Colt Coeur, where it was a New York Times and Time Out New York “Critics’ Pick,” and was later produced at Mosaic Theater (Washington, DC), InterAct Theater (Philadelphia), and Spreckles Theater (Sonoma).

Other plays include This Much I Know (PlayPenn, New Harmony, Ground Floor at Berkeley Rep), Good. Better. Best. Bested. (Custom Made Theatre, Bay Area Playwrights Festival), What Comes Next (Portland Stage’s Little Festival of the Unexpected), Siesta Key (Bay Area Playwrights Festival), and In From The Cold (Just Theater, Aurora Theatre’s Global Age Prize). He has also developed work with Roundabout Theatre Company, South Coast Rep, Mugwumpin, San Francisco Playhouse, Crowded Fire, and Theatre of NOTE. Jonathan is the recipient of a South Coast Rep’s Elizabeth George Commission, has been a MacDowell Colony Fellow, a Resident Playwright at Playwrights Foundation, and is currently a Core Writer at the Playwrights’ Center in Minneapolis.

Spector is also the Co-Artistic Director of the Berkeley-based Just Theater, where he’s produced the Bay Area premieres of many award-winning shows including Jackie Sibblies Drury’s We Are Proud to Present…, Anne Washburn’s I Have Loved Strangers, and Rob Handel’s A Maze. Through Just Theater’s New Play Lab, he developed over 40 original full length plays including Aaron Loeb’s Ideation, Christopher Chen’s Home Invasion, and Lauren Gunderson’s Toil and Trouble. He was previously the Associate Artistic Director of the Bay Area Playwrights Festival/Playwrights Foundation, where he shepherded the development of over eighty new plays by some of the country’s leading playwrights including Annie Baker, Samuel D. Hunter, Marcus Gardley, and Sheila Callaghan.