PlayLabs 2016 kicks off Monday, October 17 with a 7 p.m. reading of Core Writer Ken Urban's new play The Remains. The second reading of The Remains is Saturday, October 22 at 7 p.m. Reserve your seats here. We talked with Ken about the play, his experience at the Center last year, and what being a playwright and musician have in common.

Tell us about The Remains.

In June 2015, as the United States had finally legalized gay marriage nationally, I filed for divorce from the man who had been my partner for 18 years. The end of our marriage felt truly tragic, not because it was the wrong choice, but because it was the right one, despite the fact that we genuinely still cared for each other. For Hegel, a “genuine” tragedy is not a conflict between right and wrong, but instead a conflict between two rights. This play is my exploration of the tragedy of gay divorce.

Talk about your process: How do you structure a play?

The story determines the structure. Once I know the story I am telling – how it begins, how it needs to end – then I can see the structure of the play. For a play like The Remains, it is a linear plot that unfolds in real time, taking place at a family dinner in which a gay couple made a big announcement, while a play like The Awake, follows the logic of a dream, so it is a series of scenes, and monologues describing impossible actions where time loops and skips.

You are also a musician. What do music and playwriting have in common?

They both begin with a blank screen, and through a series of putting words or notes together, suddenly those disparate thoughts become something. Making music with a DAW (Digital Audio Workstation) like Logic and Ableton Live allows you to visualize a song in the same that Word or Final Draft do. I also tend to hear a play before I see it and that might have something to do with being a writer who makes music.

What was your experience like working on A Guide for the Homesick as part of the Ruth Easton New Play Series last year?

Amazing and productive. Being in a room with actors and Jeremy allowed me to hear that when I was bolder with the play, the play was stronger as a result. We were very fortunate to have an actor like Owiso Odera in the room to help me ground the story about Nicholas, a gay African man facing unspeakable violence. It is always helpful to hear the play with an audience and to help me know what is working and what part of the story are passing to quickly and not landing in the same as I’d like.

I am working on three new plays. The Remains, set in Boston’s South End, about a gay married couple who announce their divorce at a family dinner. The Immortals is a play about the struggles of a Black professor at an elite college, and is inspired by the thorny case of Henrietta Lacks whose cells were used in labs without her or her family’s permission. Inappropriate Sexual Relations, a novel for the stage, that tells three stories that explore the power of sex in the lives of three couples. I am also working on a new TV pilot with the working title of The Art of Listening, about an NSA contractor. I tend to work on multiple projects at the same time. It’s just how my brain works. My band releases its new album in October and we are also writing a new record.

I am no good at predictions. The desire for interesting and surprising stories remains strong, as is evident by our golden age of TV. But people feel increasingly isolated, and going to the theatre remains a way to experience something as a collective. TV and film can’t give us that. I actually hope that theatre is not so different in 45 years, that it is still a group of impassioned artists yelling and fighting and loving each other in dark dingy spaces in cities like New York, Minneapolis, Boston, and Chicago.

About The Remains: Married for a decade, Kevin and Theo are the ideal couple in the eyes of their families. But at dinner this Sunday, Kevin and Theo have big news. A comedy about the tragedy of loving. Reserve tickets »

About Ken Urban: Ken Urban is a playwright and screenwriter based in New York. His plays have been produced OffBroadway at Rattlestick Playwrights Theater, 59E59 Theatres, The Summer Play Festival at The Public, and Studio 42. He has developed new work at Playwrights Horizons, The Huntington, Williamstown Theatre Festival, and Donmar Warehouse (London). Recent productions include A Future Perfect at SpeakEasy Stage Company in Boston, Sense of an Ending at Theatre503 in London and 59E59 Theatres in New York, and The Awake at Chicago’s First Floor Theatre. His new play A Guide for the Homesick, part of the Playwrights’ Center’s 2015-16 Ruth Easton New Play Series, will receive its world premiere at the Huntington Theater Company in Boston in 2017-18. He wrote the screenplay for The Happy Sad, which screened internationally at over 25 film festivals, and is now available on iTunes and Amazon. His plays are published by Dramatists Play Service and Methuen. His band Occurrence’s new album The Past Will Last Forever is released on vinyl and digital in October 2016. 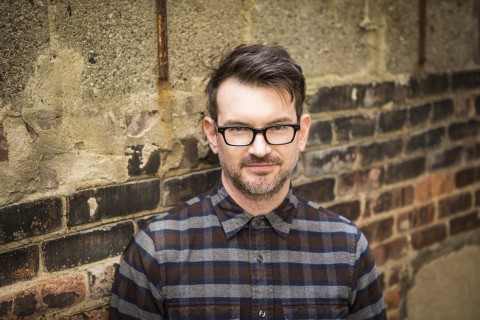