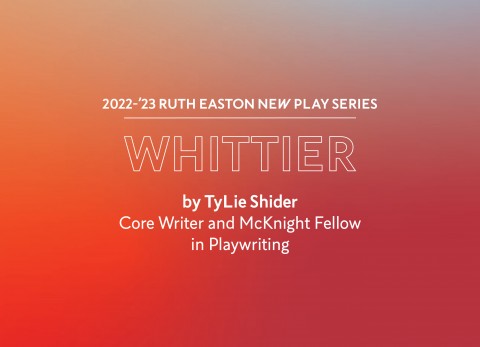 Hayley: You told me once that the question at the center of this play is: could something beautiful come out of something ugly? How did that question come to you, and how has it evolved as you worked on the play?

TyLie: During the quarantine of 2020, I took long walks around my neighborhood, Whittier, and I noticed the protest signage that emerged after the murder of George Floyd. The art was so aesthetically beautiful, and this question arose in me—and I always preface that it's a question and not my conviction—how could something so beautiful emerge from such an ugly incident? That led me to start conducting small talks and informal interviews with my neighbors. The information that I gathered from talking to my neighbors led to Whittier.

Hayley: You often start with small talks or interviews. How do they translate into the fictional characters you end up writing?

TyLie: I could've gone the way of Anna Deavere Smith and used verbatim text, but she does that so well, partly because she’s a mimic. A playwright like Dael Orlandersmith created composite characters from her interviews in Ferguson after the murder of Michael Brown. Mine is a composite situation as well, but it's not just a series of composite characters and monologues. I created an actual world around the information. So, I borrowed from Anna and Dael to create the TyLie version of a contemporary docudrama where there is dialogue between the characters.

Hayley: This play is about a community that you observed and were actually part of, and about neighbors. Why did you decide to center this play on the relationship among neighbors?

TyLie: Whittier has become one of my creative havens. I fell in love with the neighborhood when I moved here on my first Jerome Fellowship in 2019. It’s a kind of cosmopolitan neighborhood. Many of the people I meet are not from Minneapolis or Minnesota; they've moved here. In my circle, the folks who are native Minnesotans are in the minority. Before the quarantine in 2020, I would speak to my neighbors in passing, because I was busy writing plays. I’d say "good morning," or I’d introduce myself, but I didn’t really get to know many of my neighbors. But when the quarantine started, we had to stop, literally and physically, and look at one another and start building relationships around the epidemic and around the murder of George Floyd and the ensuing incidents which sort of helped us bond. It caused us to come together as a neighborhood and become more than just passing neighbors. That really is the sentiment in the play.

Hayley: You said once that you see a bit of yourself in every character you write. How does that appear in Whittier?

TyLie: Empathy and justification is how I find myself in all of my characters. As a playwright, condemnation doesn’t really serve my craft. It's hard for me to pick a side in real life. I'm always trying to unpack the motivation behind a choice, no matter how horrific or how heartbreaking the outcome. Even when I’m not writing, I try not to judge people on first encounters, because I’m more interested in the backstory that led to their behavior, and that's inherent to my personality, and that curiosity comes out in my plays.

Hayley: You're also working on a documentary film on a similar subject to this play. How do the two projects intersect for you?

TyLie: I majored in journalism, minored in theater, and my senior capstone was about how the civil rights movement of the ’60s and ’70s wouldn't have been as successful without the advent of television media. I've always had this interest in the importance of the media coverage during that era and those iconic images.

When this was happening in my neighborhood, I immediately started to think about the images and the footage that would become iconic to this modern-day civil rights movement. Because I was so gripped by the murals and the protest signage, I wanted to document the physical footage. I wanted to document something that we could look at and see "Oh, these were the iconic images from this movement." I immediately started to think about the mediums of film and photography, so the project started as a documentary and then the play followed.

Hayley: You wrote the play pretty quickly after George Floyd's murder. How has it evolved from that initial impulse and where do you want to take it?

TyLie: The play evolves every time I meet a new neighbor in my neighborhood in Whittier, but also in other areas in the Twin Cities. Every time I have a conversation with people who actually witnessed that transformative moment with us, something changes in the play, something deepens in the play, it becomes more authentic, and more of a representation of many voices.

We live in a world where everything is moving, moving, moving and even something as terrible as the murder of George Floyd becomes old news really quickly. Because my interest is investigative and journalistic, I want to capture the energy and how people remember it. I would like this play to have a premiere production in the Twin Cities, because the play was born here and it's about here, and I think that it should be fully realized here before it takes on a life somewhere else.

Hayley: How do you as a playwright navigate going back psychologically to this painful place, that the characters are experiencing and that you're re-experiencing by writing the play?

TyLie: I think that’s why I went through the signs, because their beauty gave me a healthy sense of distance from the blood that was in the streets. I kept looking to the signs because the signs represented the discourse that was happening. I think my work with the signs probably filters all of the emotions that I could get lost in by entering the world of this recent tragedy. I think art does this because it’s cathartic. It helps me to purge and concretize emotion, rather than hosting it in my body.

Hayley: How did you come to writing? What was your path to becoming a playwright?

TyLie: I always say that I identified as a writer as naturally as I identified as a black American man, the firstborn son of my mother and father, the oldest in the house, writer was right there with it, as far back as I can remember. My dad's a songwriter and I emulated him, his behavior, his patterns, his relationship with words on the page and notebooks and pens. I started writing songs and then I started writing poetry and that evolved into short stories and even an attempt at writing novels.

In undergrad I took a Modern Drama course and we studied everybody from O'Neill to Suzan-Lori Parks. Reading those playwrights gripped me and shifted my professional trajectory as a writer, because at the time I thought I would be a journalist who wrote poetry on the side. That semester was the year that August Wilson died. I read his biography and said "Oh, he was a poet too!" and I decided to pursue playwriting that day, and I've been writing plays ever since.

Hayley: Your interest in the process of docudrama has a journalistic aspect to it. I also think of you as an educator because that's important to you. How do those different perspectives feed you as an artist?

TyLie: As a playwright, and especially coming out of 2020, teaching keeps me sane because it keeps me in a room with people. Playwriting can become isolating. It culminates in collaboration, but it takes a while to get to that point. Teaching always pulls me out of my head, gives me a schedule, and pours into me. Writing is cathartic for me, so when I'm writing, I'm pouring out. When I'm teaching, I'm receiving so much, it fills me up. It really roots me in my passion for the theater and why I stay here. Watching students identify their gifts and creating opportunities for them to do so is really important to me.

Journalism feeds my playwriting because I'm an autodidact. Playwriting makes me study. Each play is like an independent study for me: I have a question and I create a syllabus for myself, I create a reading list for myself, I watch this documentary or that film. It's the way I learn.

Hayley: Has the fact that your father was a songwriter informed your style?

Hayley: Is there a question you're leaving the audience with or want them to investigate when they see the play?

TyLie: Every time I meet someone who's experienced this with us here, we're all talking about the same thing, which is the juxtaposition of what the national media covered and what we were living through.

Hayley: So, this is you showing what actually happened in a way.

TyLie: This is my contribution to the narrative of what happened in the city after the murder of George Floyd.