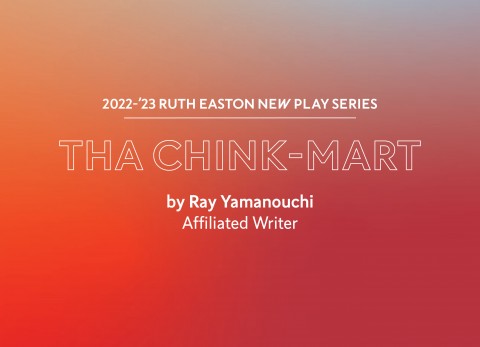 Hayley: The reading of this play at Playwrights’ Center was originally scheduled for 2020, but it’s been twice delayed by the pandemic, so it’s been a while since you've actively worked on the play. Has anything shifted for you as you return to it? Or are there ways that you think the audience might experience it differently, given where we are now?

Ray: My relationship to this play hasn't really shifted from when I created it. I wrote this play because I wanted to see the stories that I read about or that I experienced put in some sort of narrative for Asian-Americans. The relevancy of that has increased because of the wave of Asian hate in the last couple years. It feels more relevant, but it's always been relevant for me. That hasn't really changed.

The play takes place in 2004, which is interesting because I feel that was a transitional period from almost naked racism to a sort of not-naked racism. Now it would be really bad for someone to call an Asian person a “chink” or something, you know? But back in 2004, when I was growing up, it was way more commonplace. And now, especially in the last year, it feels like everything has just sort of exploded. All this stuff that was just underneath the surface has now bubbled over. Which I guess makes the play feel more relevant.

Hayley: Could you talk about the title of the play?

Ray: That's literally what some kids called the local deli and it felt apt to capture the mood of my adolescence.

Hayley: Racism is really prevalent in the play and you get a sense of that outside force working on the main characters. But it also seems that within the play there is some internal racism happening amongst the characters. Do you want to speak about that?

Ray: Racism is so manifest in our lives. I've always been interested in the fact that people of color are not exempt from racism. Inherent bias and that sort of thing cuts across color. If you grow up in a society where, for example, calling Asian people a slur is normalized, then you don't necessarily think that's bad. Even for Asian people, if society treats you like you’re less than to some degree, then you're just going to internalize that. I remember as a kid talking to many Asian people growing up in America, especially in the early 2000s or before, especially people who grew up in a majority white town, they'll tell you that they had a lot of self-loathing. That sort of racism attacks everyone.

There's this weird thing. The character Rich, in my play, for example, is the one kid who gets accepted by the white kids. I'm not saying this is Rich in the play, but, for those types of Asians, sometimes you want to be the only cool Asian, right? So you lash out, sort of, at anything that is Asian that makes you feel like you are different. That will manifest in forms where you reject your own culture, you reject certain foods, or you literally reject other Asian people. Racism will manifest in those forms as well.

Hayley: The play is personal—you grew up in Long Island at the time the play takes place. Can you talk about how you use your biography to create characters?

Ray: I still start at research. I knew I wanted to do this play because I didn't see my experience depicted. I knew other Asian people have a similar experience to me. But Asian America is so large that I wanted to make sure that I was approaching this from the proper angle. So I read a bunch of Asian-American texts before diving into the play. I was drawing from my own experience, but I was also joined by academia and other Asian-American voices.

Every character in this play has a bit of me in them. Duke's rage I felt. Rich not knowing where he fits in is something I really felt. Rohit’s anxiety about his culture when he is like, “Do I smell?” Stuff like that is from my personal experience. Yoojin’s monologue about going to Korea and having a grandma—that’s like my experience. And any sort of frustration about fighting stereotypes is also something that I've experienced. I try to weave them into the larger Asian experience. It's a play about Asian American identity using the vehicle of a coming-of-age story.

Hayley: You have this wonderful ability to show both how these characters interact socially and you tap into their inner lives in a beautiful way. The character of Mr. Chan illuminates the problem with the classic notion of the “American Dream.”  What was your intention for him and how his character relates to the younger generation in the play?

Ray: He is a more typical version of an immigrant in America. We have this idealized notion of the immigrant coming to America, working hard, and making a living. I think for most immigrants, it’s very, very difficult. Most immigrants grind away for their progeny, for the future of their family. That means taking a job they don’t like, and then just trying to survive.

Mr. Chan comes because he has his own dreams. He’s not a refugee. But I was playing with this idea of looking to America as this beacon of something great—this land of dreams and opportunity—and then that crashing down on you. It felt more typical of the immigrant experience.

There’s also that generational divide. When you have an immigrant parent who doesn’t speak English well, it becomes difficult to communicate. I think this goes for a lot of children in general, but especially immigrant children. You talk to your friends and start to get closer; you keep things from your parents. That distance from your parents grows when there’s financial hardship, and then these barriers start to come up. If you can’t talk about it, they never come down.

I grew up in a bilingual household. Ultimately, neither of my parents will really know what my plays are about because their English isn’t strong. Knowing that is a little sad for me. I try to translate the synopsis of each scene to them, but it’s not really capturing the nuance of the plays. It’s part of life as an Asian American living with immigrant parents.

Hayley: What do you want to work on in this workshop?

Ray: I want actors to come in and make it their own. Because that's the most exciting thing for me: seeing these characters embodied by different people gives the play a little bit more breadth and depth. Hopefully, I'll be able to make them even more complex than before.

Hayley: In our conversations about your plays, it seems like you really gravitate towards themes or ideas at first. Is that often your process?

Ray: Yes. I'm interested in systemic issues; I gravitate to big themes. I try to distill it through—I don't want to say small characters—but through specific individuals. I think of my plays as character-driven plays that deal with big issues.

Hayley: I experience your plays as very character driven, so I’m fascinated that you start with the bigger issues and themes.

Ray: It relates to growing up with racism all around me and I had no idea. It was in my psyche and my community’s psyche. It almost felt like the air we breathe.

School segregation in Long Island comes to mind. Housing segregation is a big thing, right? But you don't really think about it. Because you live in that artificially-created community, you think that's the world, especially as a kid and a teenager.

Looking back on it, I realize how government policies and history have permeated the people living there in incredibly insidious ways that they’re not really conscious of. That's why I'm so interested in big histories and big systemic issues that get distilled down to these people who don't necessarily think about them on a day-to-day basis.

Hayley: Anything that we didn't cover that you want to mention?

Ray: Tha Chink-Mart is one of my favorite plays. It's so personal to me, but also, in this strange way, it gives me closure. I feel like I get to rewrite my own adolescence in a way. I see myself in every character and think, “Man, I wish I could have said this or done that.” And seeing the characters able to gives me a lot of joy.