Our 2016/2017 Ruth Easton New Play Series continues January 9 & 10 with queens by Core Writer Martyna Majok. Associate Artistic Director Hayley Finn talked to Martyna about what inspired the play and how she got started as a playwright.

How did you land on the title queens?

Titles are often the last piece of a play I come up with. This one came early—maybe as a challenge and a reminder or a guide to myself at the outset. “Queens” is a location and a status. I’m writing about female immigrants who are masters of their own small domains. They have dignity. Their resilience, what they’ve survived and transcended in their lives, commands respect. But that’s not always how they’re treated in this country. My mother and the women I’ve known growing up, a lot of them single mothers, were people that came over and just by virtue of this country had to be incredibly tough and stand up for what they needed to survive. That’s the essence of a queen to me. Standing firmly on your own two feet, ready to go into battle.

Did you know you wanted to write a play for an all female cast?

Not at first. But now I want to keep it that way no matter what. It’s been hard, though! I think because of my own personal experiences, the conflicts I’ve tended to write are between men and women. Conflict amongst these women—many of whom are strangers to each other—has been more challenging. They’re roommates, tenants, landlords, friends (sort of, sometimes). They create surrogates in each other since they’re far away from their families. They craft relationships where they owe things to each other. It’s making me have to know them all very, very well because their interactions rely so much on their specific relationships to each other.

I was fascinated by the sense of society that you created in this play, and how the characters engage with each other. These characters are strong and clear about their own needs, but there’s still this great care that they’re giving other people in their community.

Thank you! It’s been amazing to be in a room with all women, these past few readings and workshops. The conversations often take on a shorthand that’s really inspiring and inviting. It lets us go deeper. I did a workshop before I started writing the play where I just wanted to be in a room with a bunch of female theater artists that were either immigrants or born of immigrant parents. We were talking and, at some point, all of a sudden, I felt the conversation ascend like, seven staircases to a level where we just jumped over some of the niceties and explanations of our parents’ or our own decisions and experiences. We were able to talk about some of the more complicated aspects of living within more than one culture. Feeling sometimes like you’re not enough of either thing, often having a lot of family far away, things like that. That balance of shorthand and education in the theater is very much on my mind these days. Particularly as American plays are being written by those who may identify differently from the demographics of the average American theater audience. How much do you explain, and how much can you just show and hope it’s understood as a universal human experience within a very particular context?

What inspired you to tell this story? What parts are based on your experience?

I came to the country young and grew up in a largely immigrant neighborhood. My mother began learning English when she came over. Everybody was working similar jobs. They had factory jobs together; they were cleaning houses, and taking care of the elderly. My mother was invited to America by a man she ended up marrying. He introduced her to “his” community—a subset of Polish immigrants amongst a larger immigrant community with people from everywhere. A few years in, when his behavior became unhinged, he started to alienate himself from that community. And because my mother was associated with him, she was also alienated. And alone in a lot of abuse. The community excluded her so she took herself out. She turned to her kids. A different job. To other people, not in that community. And eventually she left that man.

One of the things that interests me in this story is the act of helping people. The idea of helping somebody just because they’re like you…There’s both good and bad in that. It’s problematic when it’s exclusionary. Like human isn’t enough to bind two people. But then there’s also a beautiful thing in helping someone who comes from “home.”

What’s also interesting is that typically a man will go over to a new country first. He’s the one that gets the job and sends the money. That eventually gets the apartment and then sends for the wife and kids. But there’s also women who go. They’re single or their partners don’t want to go over. Many are mothers who have to leave their child in the care of other people for a time. What they care the most about—their family—is also what they rarely see. They get up every morning, make money, and send much of it away. You might get a job as a nurturer—a nanny or a caregiver—for a child or a parent that is not your own. Yours are far away.

Right now, there’s a mix of undocumented and documented women in the play. I wanted to be inclusive of stories of different citizenship statuses. And the different reasons someone might want—or need—to come here (or get away).

You asked what parts are based on my own experience. I was brought over when I was young but it wasn’t my choice. I mean, I’m happy about coming here, but the choice was made for me that I’m going to be separate culturally from the rest of my family. And separate emotionally—from memories, holidays, life events—because distance is hard. We couldn’t go back to Poland very often because of money. And so, I think underneath this play is me struggling to answer for myself whether “a better life” was worth giving up much of my family. As I’m losing more and more family in Poland to time and sickness, I wonder if it was worth it to exchange the relationships I could’ve had with them for the relationships and opportunities I have had here. I wonder who I might’ve been—for better or for worse—had we stayed.

Looking back, what brought you to theater? How did you start writing plays?

I actually didn’t see a play until I was 17 or 18 years old. Theater happened to me as a happy accident. I was working a bunch of part time jobs in high school and one of those “jobs” was hustling at a pool hall in Jersey. One night I won $45 so I decided to use it toward something I never would’ve used it for if I got it legally. My mom comes home one day from cleaning houses and—she’d sometimes bring home magazines and things for us to read that people had set out for recycling—and so she brings home this pamphlet for Cabaret. That John Stamos was in. She tells me “Uncle Jesse” is in New York doing something called Cabaret and do I want to see “Uncle Jesse”? I had no idea what the hell Cabaret was or really what the theater was. But I knew Full House. Legit, up until that point, I thought plays were movies people just couldn’t afford to make so they did it in one room. Or something Shakespeare did a long time ago. So I took my $45 and I went and saw this beautiful, dark, funny, generous story in Studio 54 about something completely devastating. With music! Something happened in my soul that night.

I found playwriting in college. Which was something similar to a thing I’d been doing before—I just didn’t know it was playwriting. I used to work for an adult literacy program in New Jersey that would teach immigrant parents and their preschool-age children the English language together. We did these skits to give them words for situations they might find themselves in. Like, what might you say when you go the bank? Or to a cafe? I wrote a lot of the skits. As I kept doing it, the plots got more and more convoluted. There was a murder plot in the bank skit. Eventually someone was like “Martyna, they just need to know how to ask for quarters.” But I was loving what I was getting to do.

Reserve your free tickets to queens » 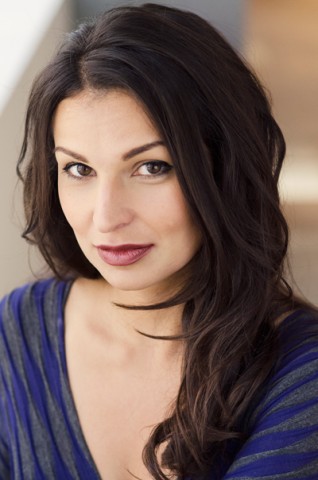