You write in a variety of styles and tone is often important in your work. How would you describe the tone of Wink?

I think on the surface the play masquerades as a very dark, absurdist comedy. There’s an edge to the comedy, and a way in which the world lives at an angle. But the thing that makes Wink’s tone tricky is that underneath all the style, there is a raw sincerity - a completely earnest conversation about our hidden desires, how we suppress the things inside us. What I’ve learned is that Wink works best when actors approach it as if it were 100% naturalism. I don’t necessarily mean in terms of pacing. I think it has a quickness and a rhythm that is non-naturalistic. But in terms of intention and motivation, there is all the emotional math of a naturalistic play. None of the characters’ needs and wants are actually stuff we can shrug off or dismiss, even though the package is sometimes absurd and comic.

What sort of questions do you want the audience to go away with asking of themselves?

I think, in the most general sense, I’m interested in inviting the audience into a conversation about the possibility of drastic transformation. Perhaps you have, within you, something that could burst out and drastically transform you, if you gave into it. What is that thing? How would your life change, if you let it out? Would you be happier than you are now? What would you lose?

What does the play say about those who follow their own desires to the umpteenth degree?

I think the play tries not to offer a value judgment on that. This is a society of such strict compartmentalization - there’s the face you show to the world and then there are all the things roiling inside you. (Thank our Puritan forebears for that.) To me, Wink is a gentle reminder that underneath any still surface, all of these invisible forces surge. You can ignore them all you want, but eventually, they’re going to break out. So what are you going to do when that happens? Push them back, or ride the wave?

What inspired you to center the play around this cat? How did you get that idea?

I think cats are really fascinating. I’m not a cat person, I don’t actually trust them, but what’s fascinating about them is how they own things. They move into a space, and they own that space. And then they move to a completely different space, and they own that space. They live in their own quiet, contained mystery that nobody can ever quite crack. Whereas a dog – and admittedly I’m much more of a dog person – its emotional life is all over its face. There’s no mystery there. Maybe the cat in the play is a symbol of the dangerous, mysterious unconscious. …Or maybe it’s just a cat.

How does Wink relate or differ from your other work?

On the one hand, I’m always trying to do something different. I don’t want to write the same play twice. I’m always trying to land myself in a place where I don’t know the path, and I have to figure it out anew. On the other hand, I find myself obsessed with the question of transformation. Can we be different? Is it actually possible to wake up and say, “I can’t take the life I’m in, not only will I change the things around me, but I will change myself as well.” I think some of my other plays explore the idea that you can’t, the idea of “You are what you are, no matter what you do around it.” But both Wink and Collective Rage are different angles on a joyful, reckless celebration of how it is possible to change completely, and then, of course, the havoc this wreaks on what you’ve built around you.

What have been some of your theatrical influences over time?

I read a ton of poetry. Anne Carson, Charles Simic, Rebecca Lindenberg, Richard Siken. When I was in my early 20s I was traveling a lot. I couldn’t take much with me. Siken’s book Crush was one of several books that I carried from country to country and re-read for years. I’ve been reading a lot of Maggie Nelson recently, I’ve gotten obsessed with her. She’s fascinating because she’s a poet AND a critic AND a nonfiction essayist AND… For her, genre is simply the vessel that is holding the story you’re telling at the moment. I celebrate that world-view. I’ve been reading a lot of Richard Yates lately, the novelist. What I find interesting in his books are that all his protagonists are trapped in these lives that they’ve constructed brick by brick around themselves. His work tends to trigger an ongoing existential crisis, but it also feeds my preoccupation with the myth of the American dream – and who you become after it’s slipped out of your fingers. The flip-side of transformation, I guess. And then of course I’m influenced by a whole pack of playwrights, designers, directors, and actors.

Would you consider, or have your written in other genres?

Yes! I actually have a two-book deal with Random House, for a collection of short stories and a novel. I’m hesitant to talk too much about what the books are “about” until I’ve spent more time in the writing phase – writing always shifts and settles when you’re in the zone with it, and I think it’s important to let things deviate away from your planned “about.”

Do you have another play that you’re working on now or have an idea for?

I do - two commissions actually. I’m in my apartment right now, and one wall is covered with pages from one of them and one wall with pages from the other. It looks very A Beautiful Mind up in here at the moment. One of them is for South Coast Rep and the other is for Writers Theater in Chicago. The Writers Theater commission is an adaptation - maybe more of a riff on a Jacobean play called The Witch of Edmonton. It was a “witch play” based on a pamphlet of the time that warned English villagers what witches are and why they’re bad. But the original play is actually surprisingly complicated – it’s a play about ethics, as much as witches. I think this is a pretty relevant moment in our culture to examine our preoccupation with good and evil, and the complexities therein.

Is there anything that I didn’t cover that you wanted to talk about?

The Playwrights’ Center is such an invaluable resource, and a place for playwrights across the country to plant their roots. I feel so fortunate to be a member of it. It’s amazing to know that there is a place out there that will be your home whenever you find your way back to it. I want to thank you and the Playwrights’ Center staff for making that home for all of us.

Reserve your free tickets to Wink » 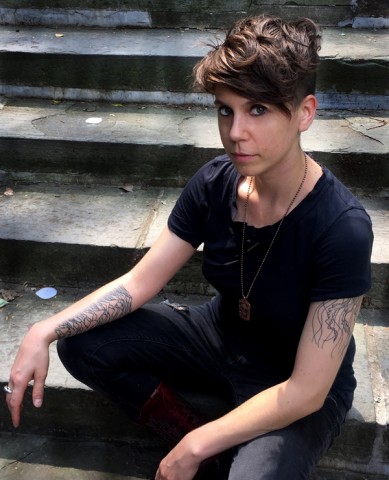