There is a lot going on with you right now. Can we start with a recap of your recent and upcoming projects?

My play The Moors just had its premiere at Yale Rep (directed by Jackson Gay), and I’m currently working on Wondrous Strange, which is the apprentice company commission for the Humana Festival this year, with three other amazing playwrights (Meg Miroshik, Jiehae Park, and Martyna Majok, directed by Marti Lyons.) My play The Roommate was at Humana last year (directed by Mike Donahue), so it’s really amazing to be able to return to a place that feels like an artistic home.

After Humana, I’ll be developing a play called Wink during the Pacific Playwrights Festival at South Coast Rep, and will go from there to Latvia and Lithuania, to co-run an international new play workshop with Anne Morgan from the O’Neill. Then I head to the Ground Floor residency at Berkeley Rep, to develop a brand new play-with-songs called My Father the Speeding Bullet: Nincest. I’m excited because it’s a super-rough first draft and I’ll be working with frequent collaborators Mike Donahue, Dane Laffrey (scenic designer), Max Vernon (composer), and the unspeakably fabulous Dito van Reigersberg, for whom I wrote the part of Anais Nin. Mike, Dane and I then head into rehearsal in DC in August for the premiere of my play Collective Rage: A Play in Five Boops at Woolly Mammoth. And I’ll be doing the premiere of a play-with-songs called All the Roads Home at Cincinnati Playhouse in the Park later in the year, directed by Lee Sunday Evans. There are a few other projects on the table for next season, but they’re still coming together.

Can you talk about finding success in the field while maintaining your own voice?

At the end of the day, I think the biggest measure of success IS maintaining your own voice. It’s not writing the play you think someone wants to read. I want to write aggressive, highly-structured, darkly comedic plays, often involving women or queer characters, often exploring various facets of identity and legacy and home-coming and institutional violence. And sometimes I want to explore those things via talking skinned cats (Wink) or depressive mastiffs (The Moors) or butch Betty Boops (Collective Rage). I’ve had people suggest that those aren’t the plays that theaters want to produce, and who knows, that may be generally true (and if so, thanks to Yale Rep and Woolly for being the exceptions to the rule). But also, if I start writing the plays I think somebody wants to produce, as opposed to the work that is an unflinching expression of my lens on the world… then I’ve already failed.

At the end of the day I would rather have a body of work I stand behind, than a series of plays that feel like compromises. Also, my personal experience is admittedly limited, but it leads me to think that theaters and audiences are maybe way more daring than we’ve been told to believe…

Something I’ve discovered is that every time I’ve asked for directions, had somebody say, “Go right,” had the impulse to go left but followed the directions… I’ve wound up in the wrong place. Every time. Impulse is subconscious knowledge. We have to trust our impulses… artistic or geographic. (Unless, of course, you have a terrible sense of direction. In which case, use your GPS.)

Where do your ideas come from? How do you know which ideas to follow?

My plays are usually triggered by characters, and the characters are catalyzed by questions. Questions that haunt me generally point me toward the characters I need to follow. Intellectual curiosity alone isn’t enough – or, god forbid, the feeling that I’ve “figured it out.” And also, I want to see a mode of story-telling that can only really live on a stage. So ideas that feel necessarily and urgently theatrical are the ones I’ll follow down farthest.

How do you balance involvement in productions with writing?

It’s a constant balancing act, and no two weeks are ever quite the same. When I’m in rehearsal for a world premiere, that takes priority, and during those times, I prioritize rewriting. But I also find that being around a director, actors, designers and that shared creative energy is really inspiring, so I’ll often jot down ideas to return to later.

When I’m not in rehearsal, I try to schedule as much as I can into certain days, so that I can have other days left only for writing. They’re never the same days, and everything is always in flux, and teaching complicates the whole thing tremendously. In fact, I feel like maybe nobody should ask me how I do anything, because the most candid answer is, “Chaotically, and differently every time.” 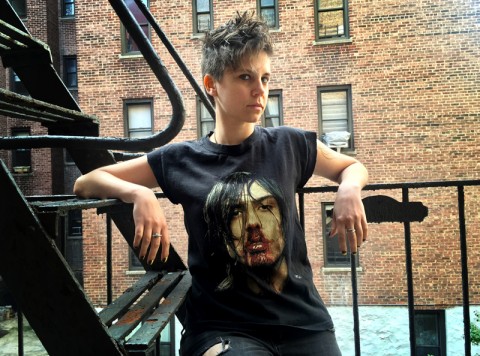