Core Writer Dipika Guha was recently at the Playwrights’ Center workshopping Malicious Animal Magnetism. Get to know Dipika a bit in this interview:

You are part of OSF’s Play On project. Can you tell us a bit about how you’re approaching your adaptation?

I’m working on a translation of Shakespeare’s Merry Wives of Windsor for OSF. My first job with this play was to really get to know it and to fall in love with the play’s joyful weirdness. The second was to comb through it word for word with my dramaturg, the wonderful Chris Sumption, and to research the period and the ways in which the play was satirising the middle class. My first pass at the translation is very straightforward. I’m trying to keep the original rhythm of the text (it’s in prose) while updating some of the more obscure references and jokes to make them accessible to American audiences.

You have been working on a new piece with Playwrights’ Center Producing Artistic Director Jeremy Cohen. What are the keys to a successful long-term collaboration?

Jeremy and I are working on a co-commission from ACT and Z Space in San Francisco on a play called Malicious Animal Magnetism. We will do a workshop production of the play in January 2018 with actors from ACT’s MFA program performing and Jeremy directing.

We are about halfway through the writing process right now on what is our first collaboration and my first time co-writing a play. So we have spent the last few months figuring out what this process really is for us in terms of how to think together and write together. It’s included eating glorious meals in Berkeley and Minneapolis, writing and rewriting for endless hours in both cities and holed up on our own, not sleeping much and engaging and re-engaging with the biggest questions in the play.

I’m loving every moment of it.

I don’t know what the keys might be for every successful collaboration. But I think this one is thriving because we are really delighted to have this opportunity to work together and are delighted by each other’s company. Writing, for me, is ordinarily quite solitary, so it just feels like a miracle when we get to exchange and revise each other’s scenes. And the outcome invariably is stronger than if I’d been working on my own.

What is something you’ve never seen on stage but would like to?

What a great question! I actually very rarely see work on stage that represents international, bi-, or tri-cultural perspectives held by a single play. I’m interested in how we move in the world when so many of us are moving across the world, adopting lands that are not our own and choosing family structures we did not grow up with. Globalization is, of course, not a new phenomenon. So I’m as interested in stories of people who ‘immigrated’ and ‘assimilated’ in ancient history as I am in our time. I want to see more of this.

What themes do you find yourself returning to in your work?

As someone who’s adapted to new places so many times, I’ve seen how much of my identity I’ve either adopted or dropped for survival reasons. If this is true for all of us, then how do we really know who we are? This question gains political heft in a time when our sense of who we are is dividing us more than uniting us. I find myself returning to this question urgently in my work, whether it’s through comedy or through a more serious or lyrical lens.

I’m not sure. But this last week it was ‘camels on heat.’

The last play I wrote is a commission from Oregon Symphony. I was given the theme of immigration and asked to write a play that would incorporate an orchestra, that would be no more than thirty minutes long, have no more than four or five characters, and to be written in four month’s time. There’s not a lot of precedent for plays written for orchestras, so I really had to develop my own strong conceit that necessitates the orchestra and then figure out what that would look like on the page. It is now a story about a survivor of a chemical weapons attack who wakes up in a small American town without his language but with this memory intact.

This piece was hard to write in terms of the constraints on the form, but also exciting for that same reason. This tension between difficulty and excitement is so much of what the experience of writing plays is for me!

How do you approach writing historically based plays?

I’ve written two plays that are inspired by historical figures: I Enter the Valley was inspired by the life and work of Pablo Neruda, and Herculine and Lola was inspired by the diary of the “first true hermaphrodite,” Herculine Barbin. In both instances, I read a lot about the figures I’m thinking about and think a lot about the landscape of their births and the circumstances of their deaths. Writing the plays is a way to compress a kind of poetic understanding of everything I’ve read into the story that I am most compelled to write. So in this situation, the historical figures are in some way recontextualised by the fictional people who enter the story.

“Write the next play.” - Paula Vogel

What is something about you that may surprise people?

My clown name is Little Tugboat.

My grandparents were refugees, my parents immigrants, the memory of a very bloody partition and great poverty is part of my inheritance. So deciding to throw myself wholeheartedly into theater knowing only that I loved it was very risky. But it’s given me a kind of soul peace I am continually grateful for and a profound gratitude for all the people who have continually supported me along my path, most especially for Paula who had faith in my work before I had any myself. 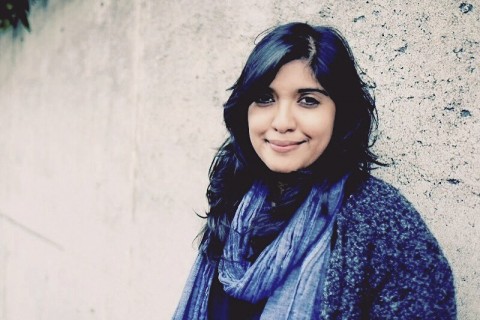