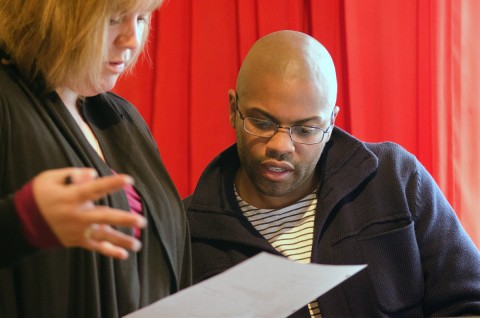 When Wendy Weckwerth meets someone at a party who doesn’t know what a dramaturg is (“yeah, that happens a lot”), her quick answer is to say she’s a kind of consultant for the theater. But if the conversation goes a little deeper, she’ll explain that the role of a new play dramaturg like her is to find patterns. And not just to find them, but “to articulate them and have conversations with the playwright about how those patterns are forming, where they may be falling apart, and where they might be boosted to make a play more cohesive. Always, of course, with the playwright’s intent in mind.”

Wendy didn’t know what a dramaturg was when she started as a theater major in undergrad, but her professor introduced the idea and got her intrigued as she gained experience as a director. After college, Wendy spent a few years working at New York Theatre Workshop, a “wonderful period of time” of learning to be a better writer, “because I’m not sure anything teaches you that in a clearer way than grant writing.” She found the new play development happening at New York Theatre Workshop to be of great interest, and it convinced her that dramaturgy should be her focus in graduate school.

She earned an M.F.A. and D.F.A. at the Yale School of Drama, a program that approached dramaturgy by taking a deep dive into dramatic structure and theater history. During this time of her life, Wendy began to understand the boon of “a performance tradition that spans millennia” in a way that informs every new play workshop she’s in. “I think we have this idea—I’m not sure where it comes from—of the need for originality and this cult of thinking of everything as brand new. But it’s more valuable and more exciting to think about every story we’re telling in the theater being built on the thousands of stories and performances that came before it.”

While Wendy has a particular love of historical plays and research, she cautions against the misconception of dramaturgs as “library bunnies out to Google every tidbit.” Instead, she believes everyone involved with the play should be doing research and bringing in information. “To ascribe research as the exclusive job of one person in the room is to really limit our understanding of the roles of all theater collaborators as intellectually engaged with the work we’re doing. Sure we’re all artists, but we’re all also thinkers. Or we should be, because otherwise why are we doing it?”

Wendy says her role takes different shapes from workshop to workshop, depending on the needs of the playwright and other collaborators. “There are lots of different scenarios for how we collaborate. I make all my choices by asking the playwright, ‘what are the things that will help you?’’ Once they’re in the rehearsal room, “sometimes my role is to be a very careful listener and note taker, and offer up thoughts after rehearsal to the playwright and director, or just to the playwright. And sometimes my role in the room is to help foster a conversation. I do that by asking a lot of questions—identifying the strategic question that, once we all answer, it’s going to inform how the actors read their roles, how the designer approaches things.”

“One of a dramaturg’s most important skills,” Wendy says, “is knowing not just how to share a thought but when to do it. More often than not, it’s important to sit on a question or an impulse until you really feel confident that you understand what is going on. Which is not to say withhold anything, exactly, but I think it’s important for dramaturgs to come into the room knowing that we’re on a journey with the play, too. Most dramaturgs are really careful readers and we do our best to come in and be as familiar as possible with the play, but like everyone else in the room we’re learning moment by moment. Once it’s embodied and takes on a form with collaborators there are so many more things to learn that you can’t learn on your own.”

Another role Wendy takes very seriously is being an advocate for the playwright. Even though collaborators come in with the most generous impulses, especially in a new-play-smart community like the Twin Cities, it can be difficult for collaborators to resist the urge to be prescriptive: “Oh, if you just did this or cut that it would make more sense.” But in Wendy’s experience, “it often turns out that the moments that are the biggest head-scratchers in a piece, where it feels like there’s this chasm of logic, or something really strange or awkward, it so often turns out that that is the heart of a really important thing. You have to go deeper to find it. If you just try to smooth it over and ‘fix it’ you’re actually going to lose what is most unique and beautiful and challenging about a piece.”

This gets at what Wendy sees as the trickiest thing about working with new plays: believing in the writing and that everything was crafted for a reason, while remaining open to finding the moments where things don’t quite seem to work.

Wendy has collaborated on countless plays over many years at the Playwrights’ Center, at theaters such as History Theatre and Theater Latté Da, and with playwrights at many different points on their journey. She has seen a lot of scripts. When asked if there are snags that seem to trip writers up over and over, she discusses structure. “Once you have a first draft, step back and look at what structure you have created: Is it serving the story? Is it clear? Is there anything you can do to polish how the structure is supporting the story? Structure can be fluid, but that is not to say that a play should be structure-less.” On a simpler level, something Wendy sees too often is the overuse of names in dialogue. “We just so rarely do that in our speech, so if you are trying to craft dialogue that feels like dialogue in a world like our own, which isn’t always the case, that’s a really easy thing to look for.”

When asked whether she is able to rest her dramaturgy muscle when attending plays she’s not involved with, Wendy says “yeah, I can’t do that.” But she wouldn’t want to if she could: “It’s impossible not to be critical, but I actually find that that’s a satisfying impulse. Even in the moments that you are finding perhaps not as successful as you want them to be, there’s something to learn from that, and that’s its own kind of pleasure as an audience member.”

For those interested in dramaturgy, Wendy recommends the Literary Managers and Dramaturgs of the Americas. She also encourages prospective and beginning dramaturgs to connect with practicing dramaturgs about the possibility of being an observer in play development workshops and rehearsals, something she did on dozens of plays when she was starting out. You can learn more about Wendy at wendyweckwerth.com.

Listen to an excerpt from this interview: