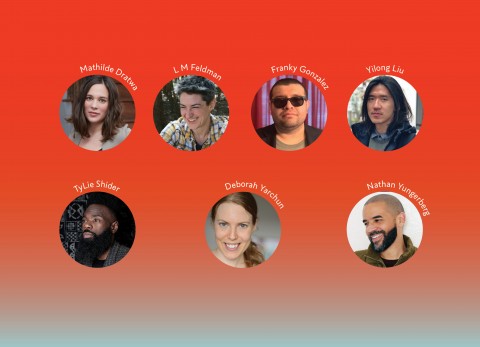 After a very challenging year for many theater artists, Playwrights’ Center offers a beacon of hope to seven of the country’s most promising playwrights through the Core Writers program. As the industry and theater artists grapple with equity and the many issues facing the field, the 2021-2024 Core Writers Mathilde Dratwa, L M Feldman, Franky D. Gonzalez, Yilong Liu, TyLie Shider, Deborah Yarchun,and Nathan Yungerberg will be given the space and support to create over the next three years.

"I am so excited for Playwrights’ Center to have the opportunity to support these incoming writers—all of whose work I have deeply admired for quite some time," said Playwrights’ Center producing artistic director Jeremy B. Cohen. “They are all incredible artists and I have no doubt, as the theater field focuses on building equitable practices as it returns from this shutdown, their work, their voices, and their visions will propel us forward into a dauntless new future for theater.”

“These seven playwrights lead with bold theatrical visions and are writing complex and nuanced stories that both reflect and interrogate our world today. Artists are the ones who help move us forward as a society,” commented associate artistic director Hayley Finn. “Now more than ever, playwrights need to know that they can consistently receive support to develop their work. And we are excited to be supporting these writers over the next three years.”

Playwright Mathilde Dratwa added, “What I love about the Core Writer program is that it offers three years of support, whereas most play development programs offer just one. The focus is on the playwright, not on a single play. The ability to think long-term feels like a breath of fresh air—especially after this year of stress and insecurity for our industry.”

“The feeling of knowing that you have the space and support to figure out your weird, messy, experimental, not-yet-ready, but ambitious new plays before you even start writing them is encouraging and assuring,” explained playwright Yilong Liu. “It's kinda like knowing you have the rent for your apartment—in this case, an artistic home—for the next three years. It will help create a sense of belonging for me.”

“The Playwrights’ Center family provided me a future to look forward to after a year of uncertainty. You've given a refuge to my messy pages before they're even written. You've offered a hand and a light in the darkest and longest tunnel of my career. Having this has helped me tremendously,” shared Franky D. Gonzalez.

Gonzalez continued, “To become a Core Writer is, to me, a validation of all the work I've put into my craft. Moreover, becoming a Core Writer is a reminder that the lonely work of playwriting does not mean that the playwright has to live in isolation without the company of their own peers and friends. Thanks to Playwrights’ Center and the Core Writer program, I have a whole community that I can proudly call my own. I am humbled and immensely grateful.  I can't wait for what the next three years will have in store.”

“Returning to the Playwrights’ Center as a Core Writer is a dream,” stated playwright Deborah Yarchun. “Playwrights’ Center has been an incredibly supportive artistic home for me; three years to continue developing work at the Center and building relationships with artists and theatres in the Twin Cities and nationally will be instrumental to my further work. I’m particularly excited to stay connected to the Twin Cities—a phenomenal theatre community.”

“Becoming a Core Writer is like a homecoming for me,” shared playwright Nathan Yungerberg. “In 1990 at age eighteen, I moved to Minneapolis. I lived several blocks away from the Playwrights' Center. While I wasn't interested in writing yet, my artist spirit sensed that something magical took place inside. I first set foot in the Center in 2012 for a member's reading of my first play, and I immediately felt at peace in this cozy church on Franklin Ave! It was also at that reading that I met Marion McClinton, who eventually became a mentor.”

Each year, the Playwrights’ Center serves as an artistic home for over 40 playwriting fellows and Core Writers, in addition to supporting 2,300+ member playwrights across the globe and partnering with producing theaters to pipeline the work from page to stage.

“Playwrights need continued resources,” noted playwright TyLie Shider. “The Playwrights’ Center has created a support system exclusively for us and our collaborators which adds value to the work we create. I only hope other institutions join in the effort.”

Playwright L M Feldman said, “I’m a playwright who works by sonar. I watch deep and listen hard: to actors, to directors, to dramaturgs, to peers. I rely on collaboration to learn how my play works, what direction I want to steer it in, and where outside insights can enrich it in key ways. So an opportunity like this—to develop physically adventurous, theatrically ambitious playworlds by working with other artists in real space and real time—is such a gift personally, artistically, and professionally. I plan to emerge with 3 new plays that have evolved into the deftest, most dynamic, production-ready versions of themselves. And I hope to find them homes. I'm profoundly grateful to have this community to contribute to and grow among, and an artistic home that can help guide me along this second decade of my career with more collaborators, a larger body of work, and greater insight.” 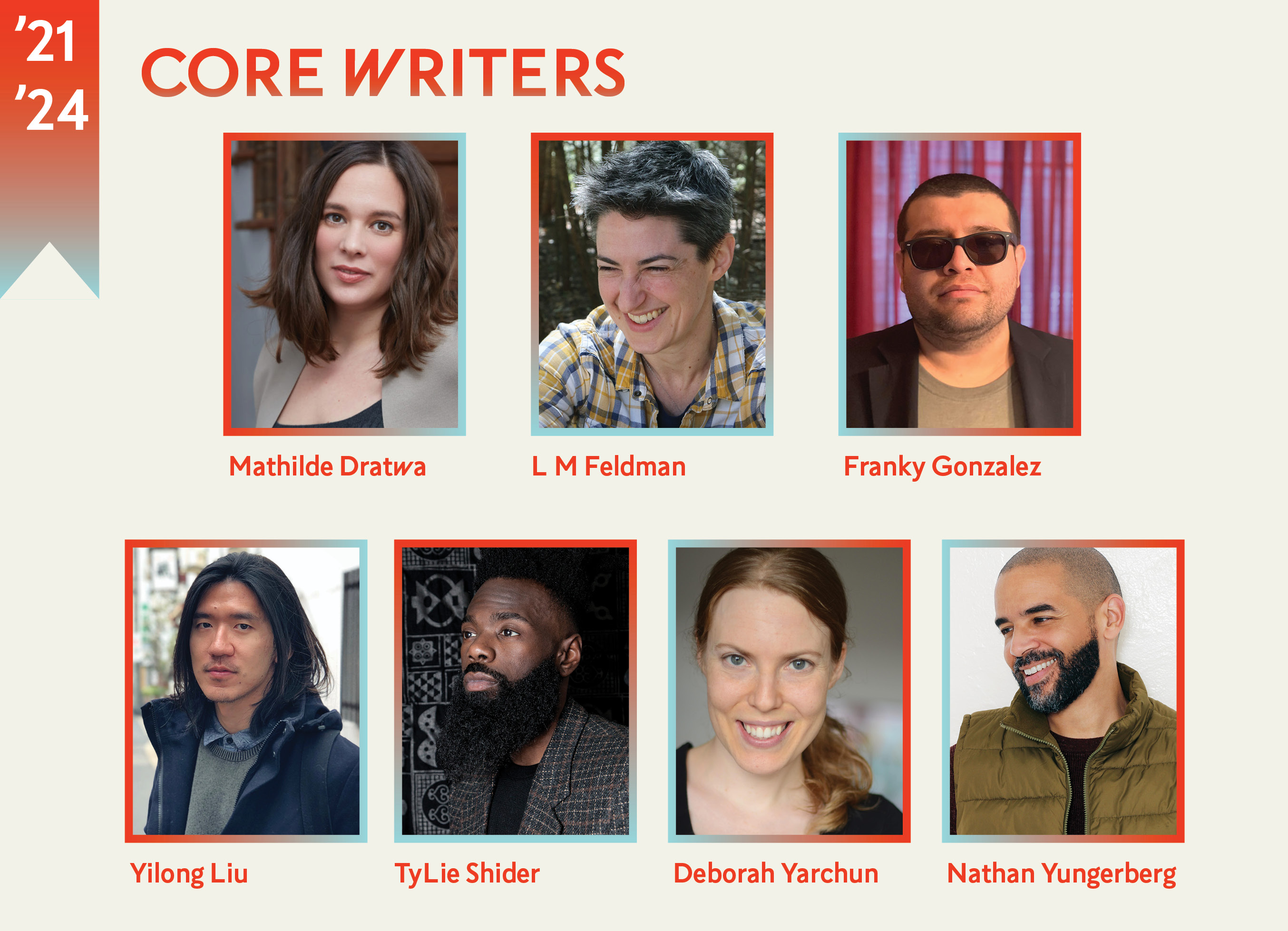 The Core Writer program at the Playwrights’ Center supports playwrights who demonstrate a sustained level of accomplishment, commitment, and artistic excellence. Approximately 25–30 playwrights from across the United States receive time, space, and tools to develop new work for the stage. During their three-year tenure, Core Writers receive play development workshops, have the opportunity to be part of the PlayLabs festival or the Ruth Easton New Play Series, and connect with an extensive network of producing theaters. Designed to meet the needs of both emerging and established writers, the program’s significant resources have further developed many playwrights’ careers. Joining the Core Writers program are:

Mathilde Dratwa’s plays include “Milk and Gall,” which will be produced at Theatre503 in London in 2021, “A Play about David Mamet Writing a Play about Harvey Weinstein,” and “Dirty Laundry,” an Audible commission. Her work has been developed and presented by the Ground Floor at Berkeley Rep, the Orchard Project, Rattlestick, LAByrinth Theater Company, the Great Plains Theater Conference, the Playwrights' Center, and the Young Vic. Mathilde is a member of Dorset Theater Festival's Women Artists Writing Group. Recently, she was a Dramatist Guild Foundation Fellow and a member of NYFA's Immigrant Artist Program.

L M Feldman is a queer, feminist playwright and deviser. She loves theater that is brave, physical, honest, and slightly impossible. Her plays include “THRIVE, OR WHAT YOU WILL [AN EPIC],” “ANOTHER KIND OF SILENCE,” “AMANUENSIS, OR THE MILTONS,” “THE EGG-LAYERS,” “GRACE, OR THE ART OF CLIMBING,” “A PEOPLE,” and many ensemble-devised works. She has been nominated for the Wendy Wasserstein Prize, ATCA/Steinberg New Play Award, New York Innovative Theatre Award, the Doric Wilson Independent Playwright Award, and twice for the Susan Smith Blackburn Prize. An alumna of the Yale School of Drama and New England Center for Circus Arts, L is also a circus performer/dramaturg, a New Georges Affiliated Artist, and a MacDowell fellow.