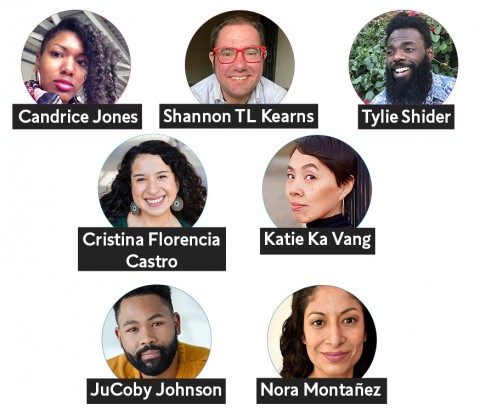 Announces 2020-2021 Jerome Fellows, Many Voices Fellows, and Many Voices Mentees. More to Come in April and May

MINNEAPOLIS (April 1, 2020) — Each year, the Playwrights’ Center serves as an artistic home for over 40 playwriting fellows and Core Writers, in addition to supporting 2,200+ member playwrights across the globe and partnering with producing theaters to move work from page to stage. Despite the uncertain times we’re currently experiencing, the Playwrights’ Center is moving forward with announcing the 2020-2021 Jerome Fellows Candrice Jones, Shannon TL Kearns, and Tylie Shider; Many Voices Fellows Cristina Florencia Castro and Katie Ka Vang; and Many Voices Mentees JuCoby Johnson and Nora Montañez. In partnership with the Jerome Foundation, these two fellowship programs have anchored the Center’s support of playwrights and theater-makers for over 40 years.

Jerome and Many Voices Fellows will spend a year in residency at the Playwrights’ Center in Minneapolis, working in an individualized and hands-on way with the artistic staff—some of the country’s most experienced and connected theater professionals. In addition to an $18,000 stipend, fellows receive $2,500 in play development funds to workshop new plays with professional directors, dramaturgs and actors. The Playwrights’ Center will also build connections between these playwrights and producers of new work around the country. This holistic and customized combination of financial support, workshops with collaborators, and professional connections is career-changing for these playwrights.

“Obviously, this is a volatile time in our global history, and we’ve worked diligently to create a new slate of programming that responds to exactly the moment in which we find ourselves. As we remain curious about what lies ahead for our world, we know that these seven playwrights will help lead the way forward with their artistry and their storytelling. I’m so excited to welcome them to the Playwrights’ Center in this capacity to continue building their extraordinary bodies of work,” says Jeremy B. Cohen, the Playwrights’ Center’s producing artistic director.

“I'm excited to be a playwright and have the time, resources, and support of the Center to further develop my voice. This fellowship will surround me with a community of theater folks I normally wouldn't get to connect with—it’s like soil to a garden,” said Many Voices Fellow Katie Ka Vang.

Jerome Fellow Shannon TL Kearns states, “Being a Jerome Fellow is a dream come true. This time to focus on my craft, connect with others, and create is vital to my future as a playwright. During the fellowship year I’ll be working on a piece that explores the connection between transgender identity, Christianity, and the use of rituals and liminal space.”

The Many Voices Mentee is a Minnesota-based beginning playwright of color and/or Indigenous playwright who is committed to spending a year learning and developing their craft. The Mentorship provides a $2,000 stipend along with free access to over $1,500 in services including classes, workshop time, and one-on-one mentorship.

“This mentorship is so important for playwrights who, like myself, grow through the collaboration process, are refining their artistic voice, and are wanting to expand the American Theater canon with often unheard stories,” added Many Voices Mentee Nora Montañez.

●  Candrice Jones is a playwright, poet, and educator from Dermott, Arkansas. She has previously been a fellow at Callaloo, a VONA Playwriting Fellow, and a CalArts MFA Critical Studies recipient. Plays include Crackbaby (2010 Wasserstein Prize Nomination) and FLEX (developed at the 2020 Humana Festival of New American Plays).

●  Shannon TL Kearns is the founder and Artistic Director of Uprising Theatre Company in Minneapolis, MN. He is a Lambda Literary Fellow and a Finnovation Fellow for 2019. He was awarded a spot in the HBMG Foundations’ Winter Playwright Retreat in 2018 and 2019.

●  Tylie Shider is a 2019-2021 I Am Soul Playwright in Residence at the National Black Theatre. His recent plays include: Roots (2019 Bay Area Playwrights Festival, Finalist), Bastard (Liberation Theatre Company), The Gospel Woman, and Certain Aspects of Conflict in the Negro Family (NBT).

●  Cristina Florencia Castro is a playwright/performer/teaching artist from San Antonio, Texas who has been living and working in the Twin Cities theater community since her graduation from the University of Minnesota/Guthrie Theater BFA Actor Training Program in 2011.

●  Katie Ka Vang is a Hmong American playwright and theater artist. Her plays and works include WTF (Theater Mu), Hmong Bollywood (Pangea World Theater), 5:1 Meaning of Freedom, 6:2 Use of Sharpening, Fast FWD Motions, In Quarantine, FINAL ROUND, and Spirit Trust.

●  JuCoby Johnson, whose debut play, How It's Gon’ Be, had its world premiere in May 2019 with the Underdog Theater. His newest play, ...but you could've held my hand, is a 2020 Eugene O'Neill Theater Center National Playwrights Conference Finalist.

●  Nora Montañez is a Minneapolis-based, Peruvian-born actress, singer, educator, playwright, and community advocate. She is the Founder of the Alliance of Latinx Minnesota Artists (ALMA), which facilitates alliances among the spectrum of Minnesotan Latinx artists.

Photos of the artists are available at https://bit.ly/3dKwmde

Cristina Florencia Castro is a playwright and performer who hails from San Antonio, Texas and has been based in Minneapolis since 2007. Cristina is Teaching Artist with Upstream Arts, a Twin Cities based non-profit that uses the power of the creative arts to activate and amplify the voice and choice of individuals with disabilities. Her recent short play May Yamoe… was produced as part of Pillsbury House Theater’s She Persists: The Great Divide III. Cristina was a 2017-2018 Nashville Repertory Theatre Ingram New Works Playwright and 2015-2016 Jerome Many Voices Fellow at the Playwrights' Center. Cristina’s play, How The Colds Were Razed (As Told By Gorilla Girl), was a finalist for the 2018 Latinx Theatre Commons Carnaval, and her play The Very Last Wishes of Grandpa Joe or Mia & Hector Go Sightseeing, is available to audio stream via Season Four of The Parsnip Ship. Cristina has taught playwriting for Saint Paul Conservatory for Performing Arts and for the Jungle Theater’s Jungle Writes program.

As a performer, she has acted in the Twin Cities with theaters such as Ten Thousand Things (The Winter’s Tale), TransAtlantic Love Affair (The Devout), Penumbra Theatre (For Colored Girls…), Artistry (Wit), the Jungle Theater (Anna in the Tropics), Daleko Arts (The Shape of Things), Market Garden Theater (Three Days of Rain), Mixed Blood (The House of Spirits), Park Square (August: Osage County), and others. Cristina was a 2008 National YoungArts Foundation Silver Award Winner in Playwriting and is a 2011 alumna of the University of Minnesota/Guthrie Theater B.F.A. Actor Training Program.

JuCoby Johnson grew up in Jacksonville, FL, moved to the Twin Cities in 2011, and has been creating there ever since. He has been seen onstage at The Guthrie Theater, Cincinnati Playhouse in the Park, The Jungle Theater, Theater Latté Da, Theater Mu, Ten Thousand Things Theatre Company, and many more. His debut play, How It's Gon’ Be, had its world premiere in May 2019 with the Underdog Theater, and his newest play, ...but you could've held my hand, is a 2020 Eugene O'Neill Theater Center National Playwrights Conference Finalist.

Playwright, poet, and educator, Candrice Jones is from Dermott, Arkansas. Candrice has been honored to have been a fellow at Callaloo for poetry at Brown University and in London. She has also been a VONA Playwriting Fellow and a CalArts MFA Critical Studies recipient. Candrice's primary goal as a writer is to write love letters for and to women of the American South. She is the author of the full-length plays Crackbaby (2010 Wasserstein Prize Nomination) and FLEX (developed at the 2020 Humana Festival of New American Plays). She has been a resident fellow at Ground Floor housed by the Berkeley Rep, the Bay Area Playwrights’ Festival, and MacDowell’s Colony of the Arts. She is scheduled to be a resident playwright at Djerassi’s Colony of the Arts in the fall of 2020. Candrice, who was a 2019-20 Many Voices Fellow, is amazed and grateful to have been chosen for a 2nd year of fellowship at the Playwrights’ Center, this time as a Jerome Fellow. She believes that in these times of peril “story and art matter more than ever.”

Shannon TL Kearns is a transgender man whose playwriting is obsessed with big questions told through small stories. He is committed to work by and for marginalized communities, using writing to create a new future for all of us. He is the founder and Artistic Director of Uprising Theatre Company in Minneapolis, MN. He is a Lambda Literary Fellow for 2019. He was awarded a spot in the HBMG Foundations’ Winter Playwright Retreat in 2018 and 2019. He has participated in Pillsbury House Theatre’s Chicago Avenue Project writing plays for and with children. He was a finalist for the Equity Library Theatre of Chicago’s Reading Series, the 2019 TransLab, and the American Stages 2019 New Play Festival. He was a semi-finalist for SPACE on Ryder farm in 2020. He also teaches storytelling and playwriting for youth and adults. Shannon’s plays include in a stand of dying trees, Line of Sight, Twisted Deaths, The Resistance of My Skin, and Who Has Eyes To See.

Nora Montañez is a Minneapolis-based, Peruvian-born actress, singer, educator, playwright, and community advocate. Nora was raised in Paterson, NJ, and holds a BFA from Florida Atlantic University. In Minneapolis, Nora has performed with the Children’s Theatre Company, Jungle Theater, the Playwrights’ Center, Pillsbury House Theatre, Theater Mu, Guthrie Theater, Mixed Blood Theatre, and many others. In Chicago, Nora has worked with Congo Square, Chicago Dramatists, The Revival, Something Marvelous, National Past Time Theatre, Teatro Vista, and Court Theatre. She was a 2018 Next Step Grant recipient as well as an Artist in Residence with Catalyst Arts and Center for the Performing Arts. Nora is also the Founder of the Alliance of Latinx Minnesota Artists (ALMA), which facilitates alliances among the spectrum of Minnesotan Latinx artists.

Katie Ka Vang is a Hmong American playwright and theater artist. Her work explores the complexities of culture, identity, dis-ease, survivorship, and community. Her plays and works include WTF (Theater Mu), Hmong Bollywood (Pangea World Theater), 5:1 Meaning of Freedom, 6:2 Use of Sharpening, Fast FWD Motions, In Quarantine, FINAL ROUND, and Spirit Trust. She's received support from the Jerome Foundation, Knight Foundation, NPN, MRAC, MSAB, and Coalition of Asian American Leaders. She’s the Relationship Manager at Springboard for the Arts. She holds an MFA in Playwriting from Brown University.