In the average year, more than sixty brand-new plays are developed at the Playwrights’ Center with the finest actors Minnesota has to offer. These actors are often the first to bring life to characters that may be only days—or hours—old. They, along with the writer, director and dramaturg, are the only people to see drafts as they change, scenes as they are cut or added, lines as they grow, shrink or disappear completely.

An acting gig at the Playwrights’ Center looks very different from an actor’s usual schedule of rehearsals and performances. The majority of workshops take place over one to three days, and many do not involve any kind of public performance. Actors participate not only in the reading of freshly-printed scripts, but in discussions of the play itself. Their feedback and on-the-spot performance choices can help inform the development of a character, a scene or an entire play.

Janaki Ranpura, one of this year’s Many Voices Fellows, described a very specific benefit of working on her play with “actors…humans who live and breathe even in the moments you were not thinking about while you were writing.” She found that the training and specific talents of actors Elise Langer and Sun Mee Chomet solidified elements of her play Willifreeze Half-Off that she had only been able approximate on the page.

“Getting the good actors,” she says, “the really thinker-y ones, is so important: their physical presence is a form of writing.”

The Twin Cities has become known as a home for strong new-play actors, thanks to the Playwrights’ Center, the annual Fringe Festival, and many local theaters’ commitment to producing new work. During the 2012-13 season, the Playwrights’ Center cast 331 roles, 60% of which went to AEA members. The majority of roles are filled by local actors, but occasionally actors are flown in from out of town to make sure the cast suits the playwright’s needs. For example, PlayLabs 2012 saw the inclusion of Brian Anthony Wilson and Forrest McClendon, fantastic national actors who brought their own invaluable talents and perspectives to Carlyle Brown’s Nobody, No Time.

For an actor, the focus on process over production can be a refreshing change. The Playwrights’ Center is “where actors take part in not only crafting a play, but in building the playground itself,” says actor Sun Mee Chomet. She describes Playwrights’ Center workshops as lessons in collaboration. “I finally understand how valuable silence can be. Yes, giving input in great, but in the end, it’s about the playwright finding out what she most wants to say.” Chomet has worked on over 100 readings at the Center, and has been awarded a 2013-14 McKnight Theater Artist Fellowship.

Playwrights’ Center workshops are, first and foremost, about helping the playwright move his or her work closer to production. This requires a particular set of skills from an ensemble: patience, an ability to make strong choices with little preparation, and a sense of adventure. Winter Miller’s play Seed—which will be featured in the Ruth Easton New Play Series next spring—calls for quite a bit more than reading lines on a page. She remembers the “fearlessness and curiosity” of her actors, which inspired her to take the risks her play needed. The play calls for a number of original songs, which had not yet been set to music at the time of the workshop. Actor Regina Williams improvised melodies to fit with Miller’s lyrics, changing her style according to Miller’s direction. “It was mesmerizing to watch someone be that unfettered, that uninhibited,” Miller says. “I think she inspired everyone else to take risks, too.”

The staged reading setup can be particularly enjoyable for an actor used to larger stages. The Waring Jones Theater, an intimate black box space that seats 70-90 people, puts actor, writer and audience directly face-to-face. Stage and screen veteran Pearce Bunting led the cast of George Brant’s Three Voyages of the Lobotomobile at last year’s PlayLabs Festival. As Walter Freeman, the “father of modern lobotomy,” he was called upon to directly address the audience while performing a mock surgery on a cantaloupe. “I’ll never forget the horror on people’s faces,” he says. Seeing the audience’s reaction during the development of the play, and being able to talk over the play with Brant was a unique and rare opportunity. “I always have questions for the playwright,” he says. “If I can hang out and talk with him/her, I’m getting the gold.”

Actors are an integral part of the theatrical community we strive to support, and seeing casts of new faces and old friends come through our doors every week keeps us energized and inspired. We are proud to both employ some of the most talented and intelligent performers in town, but also to put artists in touch with one another in a professional context. Actor and writer Ansa Akyea mentions that workshops at the Playwrights’ Center “give you the opportunity to read, get cast, and work with artists in your field that you might otherwise never encounter.”

Akyea himself has a unique relationship with the Center, having worked as an actor on dozens of readings, received a McKnight Theater Artist Fellowship for his work as a performer, and now been named one of the 2013-14 Many Voices playwriting mentees. Using his experiences in workshops with other playwrights, he is developing his own voice. “I know my experiences in the workshops/readings have reminded me to focus on the details of storytelling.”

“Working on a play at the Playwrights’ Center,” he continues, “gives you as an actor the opportunity to take more risks because you can experiment with ideas and choices in crafting a character.”

Theater is a collaborative art, and the input of actors lasts long after workshops are over. “The collaboration I’m part of on one play with a playwright,” Bunting explains, “Might affect their next play, and their next, and their next. Where else will I be given that gift?” 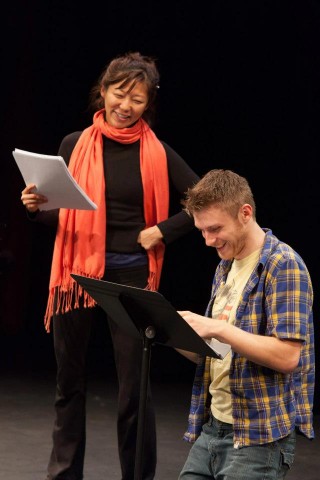