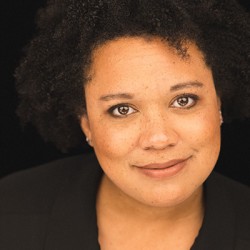 Martine Kei Green-Rogers is currently the Past President of the Literary Managers and Dramaturgs of the Americas and an Associate Professor at SUNY New Paltz.

Her dramaturgical productions include: The Greatest with the Louisville Orchestra, Classical Theatre Company’s productions of Miss Julie, The Tempest, Uncle Vanya, The Triumph of Love, Antigone, Candida, Ghosts, Tartuffe, and Shylock, The Jew of Venice; Sweat at the Goodman; Silent Dancer at Salt Lake Acting Company, Radio Golf, Five Guys Named Moe, Blues for an Alabama Sky, Gem of the Ocean, Waiting for Godot, Iphigenia in Aulis, Seven Guitars, The Mountaintop, Home and Porgy and Bess at the Court Theatre (Chicago, IL); Fences and One Man, Two Guvnors for the Pioneer Memorial Theatre; The Clean House at CATCO (Columbus, OH); and the Oregon Shakespeare Festival’s productions of Hairspray, The Book of Will, Shakespeare in Love, Hannah and the Dread Gazebo (Research Dramaturg), UniSon (Asst. Dramaturg), The Comedy of Errors, To Kill A Mockingbird, The African Company Presents Richard III, A Midsummer Night’s Dream, Fences and the Play on! Shakespeare translations of Comedy of Errors and The Two Noble Kinsmen (Ashland, OR). She also a current reader for The Great Plains Theatre Conference and the National Music Theatre Conference at the O’Neill.

Her directing credits include: a staged reading of Adopting Aunt Tabitha for the Alley Theatre’s HYPE program, a staged reading of Venus and Adonis for the Classical Theatre Company, Much Ado About Nothing at Kenyon College, The Brothers Size at the Ancram Opera House, Sender at Denizen Theatre, and Perseverance for the Ashland New Play Festival.

She is the stage adaptor of the Jason Reynolds’ book Long Way Down which premiered at the John F. Kennedy Center for the Performing Arts in October of 2018.