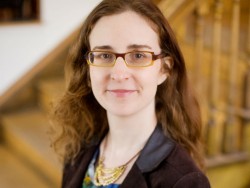 Hayley Finn is the Associate Artistic Director at the Playwrights’ Center where she works with some of the nation’s leading and emerging playwrights. Directing credits in the Twin Cities include Hiding In The Open by Kira Obolensky (The History Theatre), ADY by Rhiana Yazzie (Pangea World Theatre), Permanence Collection by Kira Obolensky and Ed Bok Lee (Walker Art Center), and Doe by Trista Baldwin (Workhaus Collective). She has directed the New York premieres of works by Sheila Callaghan including Katecrackernuts (The Flea Theater), Scab (Greenwich Street Theater), and Metal (Here Arts Center), Gary Winter’s The Lake (The Flea Theater), Golem and Dead Reckoning (both at Cherry Lane Theatre), Randal David Cook’s Fate’s Imagination (Gotham Stage Company), Rona Munro’s Bold Girls (Urban Stages), The Shoe Box at Ebbets Field by Ross Berger (Cherry Lane Theatre), Kendra Levin’s Double Sophia (Cherry Lane Theatre), and The Apology which she co-adapted with actor Yusef Bulos (The Flea Theater). Additional credits include work by Mac Wellman such as Bellagio (the Playwrights’ Center), Fnu Lnu (Theatre Outlet), and The Bad Infinity (Mac Wellman Festival), and Caryl Churchill’s Not, Not, Not, Not, Not Enough Oxygen (Drama League). She is the director and co-creator of such projects as Jigsaw Nation (Relentless Theatre), which has toured across the country (South Coast Repertory, The Curious Theater, Ellis Island), and Hysteria: Silence in Stills (Women Center Stage Festival at the Culture Project). She has assistant directed numerous plays on and Off Broadway including the Tony Award winning productions of A View From The Bridge and Side Man. She has been a directing resident at The Flea Theater and has directed workshops and readings for such organizations as The Public Theater, New Dramatists, The New Group, and The Kitchen. Currently an Affiliated Artist at New Georges, Hayley is the recipient of the Ruth Easton Directing Fellowship, The Drama League Directing Fellowship, the TCG New Generations Future Leader Grant. She holds both a B.A. and M.A. from Brown University.