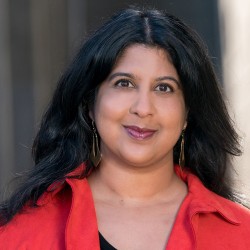 Amrita Ramanan is a multidisciplinary artistic leader who holds the values of anti-racism, anticolonialism, equity, access, diversity, and inclusion at the core of her practice. She currently holds the role of Senior Cultural Strategist and Dramaturg for Play On Shakespeare. Her recent dramaturgy credits for Play On include Hamlet, written by Universes, and Coriolanus, a podcast play in collaboration with Next Chapter Podcasts and Play On Shakespeare, written by Sean San Jose.

In her five seasons as Director of Literary Development and Dramaturgy at the Oregon Shakespeare Festival, Amrita holistically supported new play commissioning and development for the Festival. She served as the production dramaturg for OSF’s productions of Cambodian Rock Band, Snow in Midsummer, Oklahoma!, As You Like It, Macbeth, Alice in Wonderland, Henry V, and Henry IV Parts 1 & 2; produced and curated the Black Swan Lab for New Play Development; and created the first-ever OSF Writer’s Group. She supported the development of original commissions by Chay Yew, Luis Alfaro, Qui Nguyen, Cheryl West, and Kevin Douglas. Prior to OSF, Amrita was the Literary Manager and Artistic Associate at Arena Stage, where she dramaturged Arena’s productions of Mary T. & Lizzy K., Trouble in Mind, Ruined, and Duke Ellington’s Sophisticated Ladies; served as the line producer for Lisa Kron and Charles RandolphWright’s playwright residencies; and produced Arena Stage’s New Play Reading Series. As a project-based dramaturg, Amrita’s credits include The Sitayana by Lavina Jadhwani (East West Players, EnActe Arts, and Hypokrit Productions) and BULL: a love story by Nancy García Loza (Paramount Theatre).

Amrita received a BFA in Dramaturgy and Theater History from the University of Arizona. She is a board member for the Literary Managers and Dramaturgs of the Americans and the Network of Ensemble Theaters. Amrita was recently appointed a National Theater Project Advisor for the New England Foundation for the Arts. She considers herself a professional advocate for storytellers across all mediums.