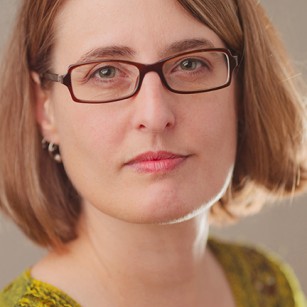 Wendy Schmidt
She, her, hers
Chicago, IL
Wendy’s work has been seen at La Mama, Chicago Dramatists, Three Cat, and 20% Theatre Company. Her play Marvelous Madeleines was produced by Three Cat in 2016.
[contact]
Website
Facebook
Biography

Wendy A. Schmidt is a playwright based in Chicago. Pre-pandemic, her one-woman play Maker of Worlds was produced in Theater for the New City’s 2019 Dream-Up Festival. She attended the La MaMa Umbria International Playwrights Retreat in 2020 and 2017, and her play Veda in Time had a staged reading at La MaMa in January 2018. Her full-length play Marvelous Madeleines was produced at Berger Park in Chicago by Three Cat Productions in November, 2016. Her play The New Republic had a staged reading in Chicago Dramatists’ Saturday Series in February 2015, and in January 2015, her full-length play The Newlyweds was included in 20% Theater Company’s Dark Room workshop series. Her ten-minute play Tornado Alley was a finalist for the 2015 Actors Theatre of Louisville’s Heideman Award. Her radio play Goose Noir was recorded live at Chicago Dramatists as part of the February 2013 episode of Small Fish Radio. As literary manager of Three Cat, she curated and organized the Chicago New Work Festival, Next Draft Series, and monthly playwrights’ group from 2017-2019. Wendy has studied at Chicago Dramatists, Piven Theatre Workshop, TUTA, and Green Shirt Studios, and has a BFA from Milwaukee Institute of Art & Design. 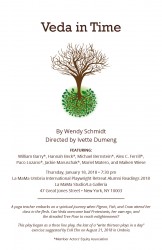 Veda in Time
by Wendy Schmidt

A yoga teacher embarks on a spiritual journey when Pigeon, Fish, and Crow attend her class in the flesh. Can Veda overcome bad Protestants, her own ego, and the dreaded Tree Pose to reach enlightenment? 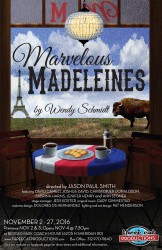 Marvelous Madeleines and National Cookies are perfect for each other. Not only are Astrid-Noemi’s madeleines an adulterous experience, Tom’s cookie marketing will fulfill your teenage fantasies. Set in a not-too-alternate universe where it’s legal for companies to get married, but marriages between individuals are frowned upon, this farce tells the story of a French cake company and an American cookie company who meet, fall in love, get married, have a child company… and ultimately must reckon with the power of the individual.