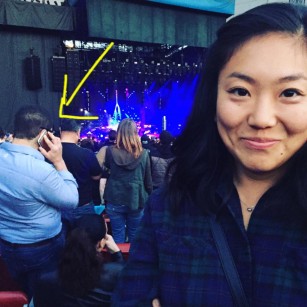 Sarah Cho
Los Angeles, CA
Playwright, Sketch Comedy Writer. This guy is on the phone talking at The Cure concert. I will never understand.
Email Me
Website
Twitter
Biography

Sarah Cho is a Los Angeles-based writer, director, and performer. Her plays include Koreans Eat Dog, Life of the Experiment, Waiting for Mr. Rogers, Monopoly, Family Dinner, and Trich. She is a recipient of the Iowa Arts Fellowship, the Richard Maibaum Playwriting Award, and the Paul Stephen Lim Playwriting Award from Kennedy Center.

After graduating from Iowa Playwrights Workshop, she went on to study improv comedy at iO West and Second City, as well as improvisational theater with Aretha Sills at Sills/Spolin Theater Works. She has performed at Green Gravel Comedy Festival, Laugh Riot Grrrl Festival, and written sketch comedy for LA Scripted Comedy Festival, the Sunday Sketch Show at formerly iO West, and LA’s topical news sketch show Top Story! Weekly at ACME Comedy Theater in Hollywood. Her work has been featured on ComedyCake, WhoHaHa, Funny or Die, and currently writes with the house comedy sketch team Gutter at the Pack Theater.

Sarah is the co-host of the "very interesting" playwriting podcast Beckett's Babies with fellow playwright Sam Collier which you can learn more about at www.beckettsbabies.com.

When Sarah's not watching HBO, you can catch her telling stories about her life at open mics in LA. BA: UC Santa Barbara MFA: Iowa Playwrights Workshop

Grace and Janette Like White Guys
by Sarah Cho

[FULL-LENGTH] Grace and Janette, two Asian-American women, are opposites in every way but one... they both like white guys, and have trouble finding the “right” ones. Together, they dream up a very specific dating app to solve their problem. With the help of a team of male, Asian-American programmers, they make the app a reality. But the experience forces them to look within themselves... and blame their love troubles on Hollywood, the media and the culture at large. The play explores themes of technology, love, entertainment, and most of all, friendship.