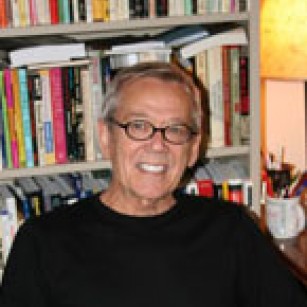 I’ve written 42 plays: six full lengths, 13 children’s musicals, 23 one-acts.  All have been performed, some in NYC, some in LA, a few in Europe, and all in theatres across the country.  Ten have been published and more than half have won awards.  Most recently my full-length, Behold a Pale Ryder; a 10 minute piece, “Joseph Receives Unsettling News;” and my one-acts, “The Naked Man on the Couch” and “Lucille flirts With the Space-Time Continuum” were published : the first by Heartland Plays, the second in Ponder (a literary journal), and the latter two by ArtAge.  Also, “Joseph Receives Unsettling News” was produced in NYC as part of the 2017 Midtown International Theatre Festival, and another ten-minute piece,  “Driver’s Side,” was work-shopped and given a staged reading at the Association for Theatre in Higher Education (ATHE) Conference in Chicago the same year.  My one-act with a rather inelegant title -- “Two Assholes on an Elephant” – just closed in the Black Box New Play Festival in NYC.  Another one-act , “Lucille Flirts With the Space-Time Continuum

Two Assholes on an Elephant
by Rick Davis

A son attempts to ease the suffering of his desperately ill father by telling him a funny story.  Instead the story opens old wounds, inflicts new ones, and leads to one final joke.

Cast:
Zack: He’s 20’s or 30’s. He’s a painter and the estranged son of Father. He’s angry. Father: Zack’s father. He sits in a wheelchair, desperately ill. He, too, is a painter. Esther: A nurse. She’s young, pretty. Father flirts with her.
Joseph Receives Unsettling News
by Rick Davis

Mary tells Joseph she’s going to have a baby.  He’s taken aback because he’s not the father.  God is.

Cast:
Joseph: A carpenter, husband to Mary. Mary: Wife to Joseph. She has some unusual news. Gabriel: An angel who has told Mary she’s going to have a baby. He can be unconventional. I see him winged in a white gown and derby hat. A peace symbol is on his costume somewhere. He needs a shave and might be tattooed. He smokes a cigarette (or a joint) at rise.
The Morphology of the Human Foot
by RickDavis

The Morphology of the Human Foot is set in the vending machine alcove of a hospital and in a room – represented by a bed – that is sometimes a patient’s room, sometimes a private bedroom.  There is no downtime.  Action shifts from simple set to simple set through cross-fades.

Esther’s a mess. She’s a podiatrist who would rather be a public middle-school teacher.  She’s a physician only because her heart surgeon -- very forceful -- father has pushed her there.  Because of a flub – not her first -- a patient named Felson, who is a scoundrel (and a bit of a dim bulb), loses both his great toes to infection after Esther removes his ingrown toenails while setting his broken ankle.  Felson sues the already vulnerable Esther.  After she’s seduced by a male nurse, Fred, Esther is certain she has found true love.  Though she’s smitten, Fred’s smothered, but he likes the sex.  He finds diversion elsewhere just when Esther needs him most.

Back to Felson.  He’s in the hospital because of a car wreck involving a dog, a fire hydrant, and a sweet old lady.  His moral code is apparently written in invisible ink, and he manipulates the system as well as the people around him outrageously (and clumsily).  He wins.

Fred the nurse is also a scoundrel.  He dumps Esther, hops into an embrace with Sylvia – who is Felson’s ex – and earns two punches in the nose.

Horace, a vending machine operator, feels invisible, unappreciated.  The hospital is awash in doctors, high-powered administrators, efficient nurses.  He stocks vending machines.  The one bright spot in his life is his pregnant wife, Allie.  But she dies during a difficult delivery.  The baby lives, but Horace has trouble accepting her. In the final scene, Horace and Esther collide at the vending machine.  They argue.  Then they yell at each other.  Then they push, slap, kick.  Finally, they fall into an exhausted embrace.

So.  Felson loses his toes but wins his lawsuit.  He also earns a swollen nose thanks to a punch delivered by his ex-wife, Sylvia, who is also seduced by Fred and is discovered along with him flagrante delicto by Esther.  Sylvia gifts Fred with a haymaker also.

In the end, Esther loses her job, Horace loses his wife, Fred loses his dignity, and Felson loses two-and-a-half toes, but wins a handsome settlement for the loss.

The play suggests that good isn’t always rewarded, nor is its obverse always punished (no surprise there).  It also suggests that there are beautiful losers among us, who strive heroically to measure up on a scale they don’t really understand. In the final scene, however, there’s another suggestion: if one perseveres, one just might bump into unexpected comfort … maybe even love.

There are two potent symbols in the play: feet – yes, feet -- and Mrs. Freshley honey buns.

Cast:
Voices: We hear three voices; all can be recorded: The Voice at rise sounds like a voice one might hear in a medical lecture: dispassionate. The second voice is Esther’s (dead) heart surgeon father. We hear him in Esther’s nightmare at rise. The last Voice (p 58 in this text) sounds like the first. Esther: She’s a podiatrist, who worries about her credentials and about the credentials of podiatrists in general. Also, she is not at all confident in her skill level and -- if the truth were known -- would be much happier teaching middle school. She’s attractive, but she’s a wreck. She loves Fred (who’s a rat). She’s in her early 30’s. Horace: He’s a vending machine operator, who frets about the value of his job. He’s decent fellow, sensitive, and very much aware that he’s invisible to the medical professionals around him. He’s married to Allie. He’s in his 20’s or 30’s. Fred: He’s a male nurse and a cynic who drinks on the job. He seduces Esther and ultimately betrays her. He’s anywhere from 25 to 35. Allie: She is Horace’s wife as well as the one bright spot in his mundane existence. She is pregnant. She’s 28. Felson: He’s a scoundrel and an opportunist, but he’s not the sharpest knife in the drawer. Speaking of knives, Esther is responsible for the loss of two of Felson’s toes. He’s 20’s-30’s. Sylvia: Sylvia is pretty, she’s hip, and she’s tough. She’s in her middle 20’s to early 30’s.

I’ve written 42 plays: six full lengths, 13 children’s musicals, 23 one-acts.  All have been performed, some in NYC, some in LA, a few in Europe, and all in theatres across the country.  Ten have been published and more than half have won awards.