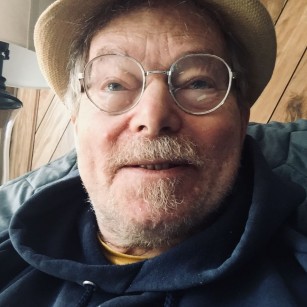 Paul Antokolsky
Responds to 'hey, you.'
BOSTON, MA
A self-taught playwright, my work ranges from the absurd to the tragic, from ten minutes to over two hours.
[contact]
Biography

Paul Antokolsky is a self-taught playwright whose work has been presented on the East and West Coasts of the U.S.; in England; and nationwide over National Public Radio. His recent play "The Rise of Jessie Bates" received the Best One-Act award at the 2021 Firehouse Arts Center festival (Newburyport, MA), and was then performed later that year at the Act Your Age showcase (Manchester, UK), where it was called 'a romp' and 'the best play of the night' by the critic from North West End UK.

Paul has had careers as a software writer for both mainframe and personal computers, and as a geriatric social worker. He also has years of experience as a host/producer/writer for nonprofit organizations on radio and cable TV. A graduate of Harvard University and a Vietnam War veteran, Paul lives in his native city of Boston.

The Rise of Jessie Bates
by Paul Antokolsky

An farce about smuggling in Late 18th Century England and an enterprising wife who finds her true calling. (36pp, Stage and Radio versions.)

An offbeat, bittersweet reimagining of the Biblical story of Noah and the Ark, focussing on the practical, moral and emotional struggles -- the human struggles -- of Noah and his family as they face this unprecedented situation. (132pp)

Cast:
Total: 9 actors, 5 male and 4 female. One male actor, however, MUST double as two key characters.
After Hiroshima
by Paul Antokolsky

The struggles of an extended Japanese family on a morning near the end of World War II, and of the American aircrew carrying the second atom bomb toward its target. (74pp)

A deranged comedy in which innocence and enterprise are accosted by audacious malevolence – plus the Canadian national anthem sung in Spanish. (57pp)

A fantasy about two former schoolmates, set in a world with very little technology. Bates is determined to find out how many stars there are in the sky and has been counting them – one by one. Colby, a struggling inventor, is dismissive of the project at first, but offers a recent invention to help the task along, a toy called a magnifying glass.  Holding the magnifier up to the sky, they are both shocked when it reveals a multitude of stars that the naked eye can’t see. Now there are too many stars to count! As they confront this dilemma, they experience unfamiliar depths of feeling and an unexpected bond forms between them. (10pp)

Cast:
Total 2 of any genders.
Fun with Fred and Abby
by Paul Antokolsky

Abby and Fred have learned to adjust to each other's quirks and faults over the years, but a lingering tension sometimes still shows itself as pointed banter or the playing of practical jokes. Tonight is Fred's birthday. Let's see how that goes. (24 pp)

A zany eruption of metatheatre as the presentation of a ten-minute play goes horribly wrong. Neither the Stage Manager's intervention nor the arrival of the leading man's dead mother (spouting Shakespeare) is much help. Fortunately, the clock keeps running and after ten minutes the Stage Manager orders everyone off. (10pp)

A cautionary tale about an office worker who ventures well beyond his comfort zone by taking a hooker to a cheap motel. Before they can get down to business, though, an intruder robs the john and holds them both at gunpoint. All three soon feel trapped in the small room before the hooker persuades the intruder to make his escape (taking the john's car). She then leaves too and the John is left to pull his shattered evening together. (24pp)