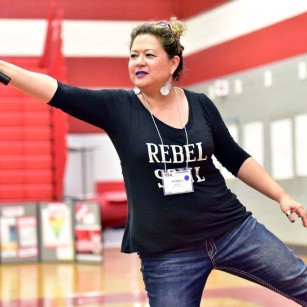 PANDORA SCOOTER is an award winning playwright and national touring artist.  Currently writing a feminist stand up show (NOT an oxymoron) and a new one-woman show inspired by Ayn Rand, for which she will be artist in residence at the Hypatia-in-the-Woods writing residency in July, 2018.  In May 2018 she will be honored with the Best Musical Award (wRETCH) for the book and lyrics by the Fresh Fruit Festival.

An outspoken advocate for Misfits and Fits of all shapes, colors and sizes, Pandora strives to relay her message of inclusivity and compassion everywhere she performs.

Writer of twelve one-woman shows, hailed by nytheatre.com as a "masterful entertainer" and by Out in Jersey as "a Force of Nature." Pandora Scooter entertains, inspires and makes people laugh 'til it hurts.  Pandora is pro-people, in all their glorious individualizations.  Her hilarious spoken-word rhymes and rants thrill and inspire audiences.

In her own words:

I believe the world needs as much connection between people as possible. I'm out here to connect with as many outsiders and misfits as I can - and to let them know it's ok to connect with each other. To let them know that it's ok to be everything they are and want to be - in all the complexities and confusions that make life what it is: one big, crazy, beautiful messy love storm. You are Enough.  Power to the Peaceful and Love to All...

A writer struggles with her internal editor to write a first draft of her autobiographical play which centers on hysterical and heartbreaking moments in her life.  Inspired by Pirandello and Durang.

A successful lyricist struggles to collaboratively write THE gay anthem for a competition for Stonewall's 50th Anniversary.  Through the challenging and sometimes comedic process, she learns what community really means to her.