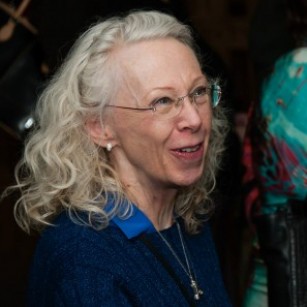 Karen’s theatrical experience began at the age of 15, when she played Kim MacAfee in a local production of Bye Bye, Birdie. Kim is 16 years old so Karen’s inauguration was precocious even though, at this point, she might be considered a late bloomer. She majored in theater at the University of Minnesota, where she studied under Doc Whiting, and, after graduation, continued acting in local Minneapolis theaters.

When she eventually began writing, Karen turned to fiction for children and young adults but never considered writing for the stage. Her first play, Slow Dance in Cut Time, was born in frustration when an unyielding novel demanded it be revised in the form of a play. Since then, Karen has written eight full-length plays and two ten-minute works.

Karen is a past recipient of a Heekin Group Foundation Writing Fellowship and a winner of the of TimeOut/Theatre 503 Urban Scrawl competition for her radio drama Arnos Grove.

Every age has its issues.  One of those issues is AGING.

Slow Dance in Cut Time begins with a journey, a death, and a careless comment which converge like streams spilling into a river.  The characters of assorted ages and stages of life, clinging to flotsam or fighting against the flow, are all born along by the currents, out of control, tossed in the eddies, washed downstream.

References to Peter Pan — Anna’s physical size and manner of standing, the play of shadows, the talk of flying, the ticking clock reminding us of the approaching Croc, the bedroom window in Quentin’s house in Kent and Anna’s bare-legged silhouette, etc. — run throughout the play as symbols of the fight many of us wage against age.  But the ceaselessly flowing river is also present, drowning us all, eventually.

While Peter Pan may choose not to grow up, nor to grow old, the rest of us have no choice.  Short of an early death, we all grow old.  Growing up — that’s another matter.  We may choose to ignore or excise the sag, fat, and fold.  We may shrug off the weighty residue of experience and memory.  Still we grow old.  That said, mightn’t it be best to grow up as well?

The threefold responsibility of the artist is: to creation, the individual talent, and to humanity.    Charles Philip Brooks

Edna St. Vincent Millay, deceased, is brought before the Highest Court to answer for her offenses.

The Charge: Crimes against humanity through willful debasement of the artist’s body and mind.

The Problem:Does an artist have the right to destroy her life and hence her particular and unique talent with sex, drugs, alcohol?

Mightn’t it be right and proper to hold artists to a higher standard than we hold more common types of humankind?

What does an artist owe the world of Art in light of the fact that many artists are denied the space, time, support, even physical and mental safety by which they may be allowed to pursue their vision?

What right does an artist have to ruin lives, not her own and not even those who have chosen to participate, but the lives of innocent bystanders?  Should an artist be held responsible for any and all collateral damage?

Lurking variable (definition) - a variable having an important effect on the relationship between variables in a study but not included among the variables studied.

Stella, having left her husband and her home, withdraws from the world, constructing a reality outside the norm where she begins to discover her range as a painter.  Although others intrude, she is defended and comforted by her companion Matthew, a construct based on a man she met at a gallery opening and whom she does not meet again, in the flesh, until several months later, at the opening of her own work.  In the end, the real Matthew Owen will wrest her from her solitude and the comfortable relationship she had developed with her imagined Matthew. Stella’s choice to go away with the real Matthew should leave the audience discomfited.  Stella, by severing the relationship with her imagined Matthew, may be abandoning that portion of her psyche that keeps her upright, forward-moving; her source of power and confidence. It might be argued that some people are complete in a circle that includes no one but themselves.

Eve Kline is of a particular generation as well as of a particular class.  Raised to be a wife and mother, taught that to ask for more out of life is to be, if not un-natural, then certainly ridiculous, she finds herself nearer the end than the beginning of life, without the education she had longed for, without a fulfilling career, without a partner’s support and relief, without children to provide purpose, and without energy, confidence, or direction. So, to George Elliot’s blithe statement, It is never too late to be what you might have been, Eve’s response might be: Don’t be an ass.  Of course it’s too late.

Eve has come to Cambridge, to visit her daughter Lily who studies there on a post-graduate scholarship.  This exclusive university town, along with all it represents, amplifies Eve’s feelings of anger and shame.  She realizes that she envies Lily and the realization strikes like a rock to the temple.  Envy, to Eve, is the ugliest of sins, unspeakable, sickening.  And to envy one’s own child is akin to prolicide or, at the very least, the unbearable wish to see Lily brought low.  These unnatural desires throw Eve into a manic state in which she believes she has the ability to fix the world.

We, on the other hand, are silly, weak, dangerous creatures, set on self-destruction as much as self-preservation.  And so we march forward with our backs to the front, carrying memories that might inform but which we bind and stow within the deepest recess of our minds for to remember would be suicide.  These are the impossible memories.

We must sublimate to survive.

But for a poet to sublimate is to sin at the most fundamental level.  This act deserves damnation, for a poets’ sole purpose is to remember and remind.  The prudent and common comes from Heaven.  Everything innovative, strange, and poetic thrives in Hell, under the Devil’s influence. All those who dare are damned.

Disclaimer: The playwright is aware that to write a play about war, knowing that this effort will not stop any of the world’s conflicts, guarantees, through this failure, her own damnation.

The character of Jonah Hilliard is based, somewhat, on Kalief Browder, a young African American, 16 years old when he was arrested for allegedly stealing a backpack two weeks earlier.  Kalief was sent to Riker’s Island and held, without trial, for three years.  Two of those years, he was restricted to the Central Punitive Segregation Unit or solitary confinement.  Kalief was released in 2013 without a trial.  In 2015, Kalief committed suicide by hanging.

I began this play with a question in mind: What differences are there between solitude and solitary confinement?

Solitude is a state wherein many people feel discomfort.  Human beings are often defined as communal creatures, needing the support of other people in order to live well.  But quite often solitude is touted as a growth medium for creativity, spirituality, insight.

Solitary confinement, on the other hand, is most often defined as torture.  Anders Breivik, who is held in prison under tight security for murdering 77 people in the summer of 2011, recently sued the Norwegian government on the grounds that his punishment was inhumane and won a partial victory.  Yet Breivik’s state of detention might be considered POSH compared to the solitary confinement within U.S. prisons, where inmates, as a result of the deprivations and abuses, are driven mad.

This play, The Depth of Holes, is an imaginative investigation of the various effects of these states of being on my characters, as Darcy assumes a life of solitude and Jonah digs his way into solitary confinement, a.k.a. The Hole.

Alone, Alone, Oh is based on the lives of two Irish-born women, Eleanor Butler and Sarah Ponsonby, who came to be known as the Ladies of Llangollen. In 1778, Eleanor, age 38, and Sarah, age 23, ran away together, rather than be forced into a convent and an unwanted marriage, respectively.  They were caught and brought home but soon “eloped” again, and this time were allowed to leave. Making their way across to England, they searched for a proper home and finally settled in a house they called Plas Newydd, in Llangollen, Wales, where they lived together from 1780 until Eleanor’s death in 1829.  Sarah continued living in the house until her death in 1831.

The playwright has made a determined effort to hold the facts close, yet this play is a work of fiction and for the sake of story, she has taken some liberties with the truth.    Ann Radcliffe was one of the most popular authors of her time and was the namesake of the Radcliffe School of Gothic literature, but as far as I know, she was never a guest at Plas Newydd. It is a fact, however, that she disappeared for a period of time in 1787, after the scathing criticism of her book, The Italian. It was falsely rumored, at the time, that she had been committed to an asylum. Ann never wrote another work of fiction.  Josiah Wedgwood died in 1795, two years before the time in which this story takes place. However he was a regular visitor at Plas Newydd, and his oldest daughter, Sukey (Susannah, mother of Charles Darwin) was Ann Radcliffe’s only known childhood friend.

Cast:
4 Women or 3 Women/1 Man Lady Eleanor Butler – born 1739 (current age: 58); large boned, with masculine mannerisms, e.g. handshake, stride, temperment, etc. Sarah Ponsonby – born 1755 (current age: 42); tall, finely boned, typically feminine but physically strong, mentally determined Mary-Carryll – housekeeper; tall, large, strong; was nick-named Molly the Bruiser when she was employed in a tavern back in Ireland; she travelled with Sarah and Eleanor, having abetted the Ladies in their escape; she does not presume to sit with the Ladies at meals or in conversation, yet is considered family; she was buried beside the ladies, her grave and theirs marked by the same monument Ann Radcliffe – born 1764 (current age: 33); author of gothic novels, e.g. The Mysteries of Udolpho, The Italian; the most highly paid, most popular author of her era; the creator of Gothic fiction and forerunner of Dickens, Collins, and Poe. Mr. Josiah Wedgwood – a friend of the Ladies; founder of Wedgewood Pottery (can be played by same actor as Mary-Carryll)
Social