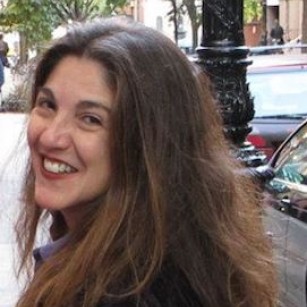 Janis Astor del Valle
She, her, hers
New Haven, CT
Janis is a Bronx-born Puerto Rican lesbian, writer, performer and educator who uses her plays and films to foster discourse and understanding of LGBTQ issues.
[contact]
Website
Twitter
Facebook
Linked In
Biography

Janis Astor del Valle (writer-performer-educator) uses her plays and films to foster discourse and understanding of LGBTQ issues and cultural diversity. She is a member of the Actors Studio’s Playwright/Director’s Workshop, and has served as an Assistant Professor in the Practice of Arts Management and Entrepreneurship at SUNY Purchase since 2013.

Janis enjoys touring her solo plays: Trans Plantations, which explores her identity crisis as a New York-born Puerto Rican lesbian uprooted from the Bronx and transplanted to Connecticut; and, Becoming Joaquin, about a Latino transman and his family who are in therapy, struggling to accept his identity. She is working on a number of theatre and film projects, including a new play about the cycle of violence, Getting There.

Janis holds an MFA in Film from Columbia University and a BA in Theatre from Marymount Manhattan College. She has performed in and outside New York, including HERE, the Nuyorican Poets’ Cafe, Hartford Stage, Yale, Dartmouth, Smith, DePaul, Wesleyan, UMASS, Housatonic Community College and Suffolk County Community College.

Her plays have been produced by Dixon Place, INTAR, Pregones, Cornell University, and University of Santa Cruz, and are published in six anthologies including Puro Teatro and Action: The Nuyorican Poets Café Theater Festival. Three of her pieces (a poem, a monologue and an essay) are published in Sinister Wisdom 97:Out Latina Lesbians. Her short film, A South Bronx Tale, has screened at the New York International Latino Film Festival, NewFest and the Austin Gay and Lesbian Film Festival, among others.

Janis was previously awarded an Artist Fellowship Grant in Playwriting from the Connecticut Commission on Culture and Tourism. She is a past recipient of the Zaki Gordon Award for Excellence in Screenwriting, and an Aurand Harris Fellowship from the Children’s Theatre Foundation of America.

Janis is a past member of the Joseph Papp Public Theater Latino Writers Lab, the Dorothy Strelsin (Primary Stages) New American Writers Group and the Latino Writers Lab at the New York International Latino Film Festival and National Association of Latino Independent Producers. She was a Van Lier Fellow at Mabou Mines.

Janis served as the Executive Director of Youth Rights Media. She taught theatre and creative writing at the Greater Hartford Academy of the Arts and was Director of Wesleyan University’s Green Street Arts Center. Before relocating to Connecticut, she was Youth Development Specialist at The Point, a community cultural center in the South Bronx. Janis resides in New Haven, CT, with her wife, their cat and dog.

A solo play in which Janis Astor del Valle portrays multiple roles to tell the story of a Latino transman (Joaquin) and his family who are in therapy, struggling to embrace his identity. As Joaquin strives to gain acceptance from his family – and himself – he discovers his arduous journey unexpectedly leads him closer to home.

Cast:
Getting There
by Janis Astor del Valle

A solo play-in-progress in which a group of characters – witnesses, victims and perpetrators – struggle to cope with violence and its impact upon their lives. For Luz, ignoring the violence in her community only serves to remind her of how close it hits home. Carlos laments the loss of his best friend and blames the wrong people. Rey tries to understand the cycle of violence that put him in a wheelchair. Mateo endeavors to atone for pulling the trigger by facing his victim. Frustrated by decades of cold cases, Sgt. Gutierrez calls out neighborhood bystanders. Wanda, rallying for justice and peace in her city, implores us to remember “a life is a life is a life, black, brown or white.”

Getting There explores three overarching issues: 1) how an individual reaches the point of committing violence; 2) how violence impacts individuals and communities; and, 3) how the violence may have been prevented.

Through the piece I’m hoping to:

• Raise awareness about the different factors that can contribute to violence, and in particular, gun violence, such as adverse childhood experiences, and easy access to guns (lax or ineffectively enforced gun control laws);

• Promote discussion of the notion that violence can be a learned behavior, passed on from generation to generation;

• Foster a deeper understanding of the underlying causes and effects of gun violence as a means of informing strategies for intervention and prevention;

• Inspire/spark discourse and action on gun control as well as restorative justice. 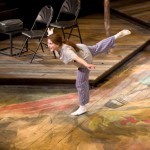 Getting There was named a finalist in the Eugene O'Neill Theater Center's 2018 National Playwrights Conference.