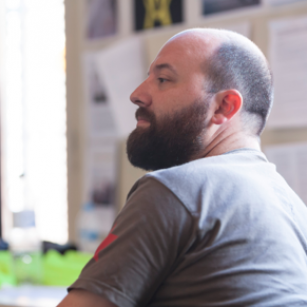 Hank Willenbrink's play The Boat in the Tiger Suit premiered at The Brick (New York) and is published by Original Works Publishing. Hank's work has been seen at Sala Beckett (Barcelona), JACK, Performance Highways, WordBRIDGE, quiet, and World Interplay International Festival of Young Playwrights (Australia). 18 won the John Cauble Award for Best Short Play from KCACTF. Hank’s monologues have been featured in Monologues for Men by Men, More Monologues for Men by Men, and Best Men’s Stage Monologues of 2014.

Hank’s essays have been published in Theatre Journal, Contemporary Theatre Review, Theatre Forum, and online at The Lark and HowlRound. He co-edited an anthology of contemporary Spanish and Portuguese-language writers, Palabras: Dispatches from the Festival de la Palabra. His essay on the use of music in HBO’s Girls can be found in HBO’s Girls and the Awkward Politics of Gender, Race, and Privilege. He co-founded the music blog We Listen for You (welistenforyou.com).

Ambos Nogales is a border town split in two by a wall. Ed lives on one side where he is trying to get his life back together. He’s engaged in a custody battle for his daughter, Emily, settling down with his new girlfriend, Vanessa, and under investigation for the shooting of a Mexican teenager while working for US Customs and Border Patrol in the run up to the 2016 election. As the world tries to drive us apart, Ambos asks what it takes for stay together as a nation, as neighbors, and as a family. 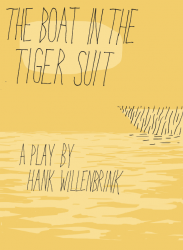 The Boat in the Tiger Suit
by Hank Willenbrink

This surreal dark comedy interrogates the divisions and distinctions that make up family. Set on two different dinghies, The Boat in the Tiger Suit begins at Herman’s funeral, who left his family to join the army (and hide from his wife in the process). As Herman’s wife searches for reasons to make her adult children stay, her son Rene slips off to seduce Gene, the solider who accompanies Herman’s casket. Meanwhile, Rene’s sister April attempts to free herself longtime partner and high school sweetheart, Dave. Tacit allegiances are formed, tried, and tested as the quartet of remaining characters stare into an uncertain future of turbulent waters which may contain tigers.