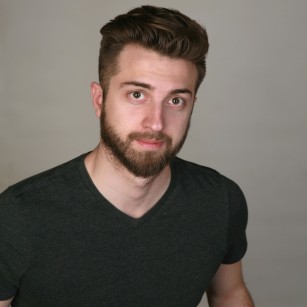 As an actor/playwright, he has worked with the Guthrie Theatre, Chicago Shakespeare Theatre, American Players Theatre, Utah Shakespeare Festival, Forward Theatre, Milwaukee Chamber Theatre, In Tandem Theatre and the Back Room Shakespeare Project, among others.

His debut short film (writer/director), One Foot In, was made in partnership with Canon CinemaPro and has received awards at numerous festivals.

His upcoming film, We’ll Want For Nothing, is currently in post-production.

He has also adapted foreign content for Netflix and Disney+

The Candidate: A Comedy of Panic

Ms. Withers is not not crying. Ms. Wright is waiting. Mr. Fitch is not here. Half door comedy, half satire, The Candidate shows corporate accountability culture at its most farcical, its most circular. Panic is in the air.

A PhD student embarks on an ambitious research project in a closed wing at a zoo. What she and her colleagues discover behind closed doors leads them to questions of taxonomy, human identity and the nature of inquiry. Sapiens is an irreverent look at the ways we categorize each other and ourselves.

Ishtar ventures into the Underworld to visit her estranged sister but her departure sends the natural world into chaos. What results is a power struggle full of poetry, environmental decay and circular humor. Reign/Fall is based loosely on the ancient Sumerian myths of Ishtar, Goddess of Love and War.

After an accident with their combine, a family of Wisconsin soybean farmers seeks the help of a powerful Amish family to save their harvest. A play about rural life in the modern world and our fading regard for craftspeople.