Born and raised in Indiana, Donald E. Baker is the author or editor of several non-fiction books and articles on Midwestern history. After earning graduate degrees in history and library science from Indiana University, he worked as a public librarian in Evansville and Newburgh, Indiana, and Cincinnati, Ohio. He began writing Indiana-themed plays after retiring with his husband to Myrtle Beach, South Carolina.

Baker has written four full-length plays. “Grand Dragon in Power” concerns the downfall of the KKK Grand Dragon who was the political boss of Indiana in the 1920s; it is available in a full-length stage version and as a radio play. The radio play was performed before a live audience on March 26, 2018, by the Radio Theatre Project at the Studio@620 in St. Petersburg, Florida, and then uploaded to Soundcloud.com.

Indiana's Klan era is also the background for his full-length play "Trade With Klan," which concerns choices and compromises forced on small-town Hoosiers in the face of Klan oppression. "Trade With Klan" received an 11-performance production by Southwest Theatre Productions as the Santa Cruz Theater in Austin, Texas, January 17-February 2, 2020.

Baker's “My Brother Paul” is a play with music about the sibling rivalry between Theodore Dreiser and his brother Paul Dresser, a popular song writer and actor. He has also written a one-person play about a Civil War-era steamboat captain entitled “Web-Footed Dreams, or, Paddlewheels and Politics in Peace and War.”

Trade With Klan (aka Back Home Again)
by Donald E. Baker

(Alternate title: "Back Home Again") FULL LENGTH. What do you do when people you love choose hate? Ordinary people must make life-altering choices when the Ku Klux Klan pits Protestant against Catholic in a small Indiana town in the 1920's. The religious prejudice and xenophobia of a century ago still echo in contemporary American society. Produced by Southwest Theatre Productions, Austin TX, 2020. Published by Next Stage Press (https://nextstagepress.net/trade-with-klan-a-play-about-choices/)

Cast:
CHARACTERS (3M, 4W) -- MILLIE BARNETT Age 45, Café owner, resists joining the Women of the Klan. “What you learn if you live long enough and you’re lucky, is … [t]he most important thing is trying not to disappoint yourself.” -- HELEN BENBO Age 47, Millie Barnett’s sister, ardent Klanswoman, town busybody. “It’s thrilling to think even an ordinary Indiana housewife like me can be part of something so big, so important!” -- NORA BRENNAN Age 24, Waitress, Catholic. “To them simple friendship between a man and a woman is impossible. … I’m in their crosshairs now.” -- FRANCIE ROSS Age 24, Waitress, Protestant, engaged to Elroy Lenhart. “The Women of the Klan … [g]ives me an excuse to get out and socialize with the other women and keep up with everybody.” -- REV. GIDEON HEYWARD Age 60+, preacher, Klan leader. “All right-thinking men of God support the Klan’s efforts to defend our country from the Catholics.” -- ELROY LENHART Age 27, merchant, pragmatic Klan member. “I need this store so that’s just what you gotta do. You join stuff.” -- REV. DANIEL LENHART Age 24, Elroy’s brother, preacher just out of seminary. “I just can’t picture Jesus in a Klan robe. Of course there was a time I couldn’t imagine my mother in one either.” -- All characters are white. There were almost no people of color in rural Indiana in the 1920’s. With no one else to oppress, the white folks turned on each other.

KKK Grand Dragon D.C. Stephenson becomes the political boss of Indiana in the 1920's. He is brought down after being convicted of raping and murdering his girlfriend. Based on true events.

1 MINUTE. Robert has had it with Uncle Jake's annual Thanksgiving rant about "people like him." 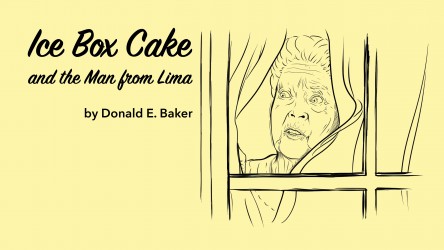 Ice Box Cake and the Man from Lima: A 10-Minute Monologue
by Donald E. Baker

10-Minute Monologue: While preparing to host her ladies’ bunco club, a white woman of a certain age is shocked to see a person of color walking down her street in the 1950's. The play uses humor to show the casual racism of the time and to demonstrate that fear of young Black men is nothing new in American society. Produced by Stage Left Theater of Spokane on Facebook and Vimeo, October 8, 2021.

MONOLOGUE: 7-8 minutes. Richard, a fifty-year-old gay man, has lost his partner (and everything else) to COVID-19. Performed by Mike Folie as part of Talking Horse Productions' Original Monologue Contest Season 2 and uploaded to Talking Horse's Facebook page and website.

30-MINUTE TWO-HANDER. Confessing to an incident in a public restroom brings up old secrets and threatens a lifelong friendship.

Cast:
2M. Eddie and Danny, lifelong friends, both aged around 30, who still live in their small hometown.
For a Man Your Age
by Donald E. Baker

Ten-Minute Two Hander. Comedy. With their elevator not working, older gay couple Michael and David find themselves trapped in their high-rise condo, discussing aging, flirtatious baristas, and the National Geographic.

ONE-PAGE MONOLOGUE. An older white woman discovers an interracial same-sex couple is moving in across the street.

10-MINUTE TWO-HANDER. Ben, who never appears in the play, is in the hospital on life support following an accident. His lover of five years, James, and Ben’s homophobic sister, Sharon, meet for the first time to discuss what happens next.

10-MINUTE MONOLOGUE. An older man remembers what he saw spying through a knothole when he was thirteen.

KKK Grand Dragon D.C. Stephenson becomes the political boss of Indiana in the 1920's. He is brought down after being convicted of raping and murdering his girlfriend. Radio adaptation of the author's stage play.

In 1880 a mob attempted to take a Negro prisoner from an Indiana jail and lynch him for the crime of shooting a white man. This 5-6 minute monologue is adapted from the sheriff’s own account the event.

Around 1900, two men are divided by sibling rivalry and united by brotherly love as they struggle to escape their strict childhoods. Inspired by the songs of Paul Dresser (“My Gal Sal," “On the Banks of the Wabash”) and the writings of Theodore Dreiser. Good vehicle for a “portly” leading man. 3M, 1W, one set, one instrument (piano), one short solo dance.

Cast:
1 W (doubling), 3 M PAUL DRESSER: Age 47. Tin pan alley composer. Baritone. THEODORE DREISER: Age 48. Paul’s brother, despite the different spelling of the last name. Novelist. Dialogue only. MAX HOFFMAN: Age 30’s and up. Pianist and Paul’s music arranger. Accompanies the singers or appears to do so if an offstage accompanist is used. Plays minor male characters. Tenor. AN ACTRESS: Age 30+. Plays four women in Paul’s life, including his mother; a bordello madame; a burlesque queen; and a singer. Soprano.
Web-Footed Dreams, or, Paddlewheels in Peace and War
by Donald E. Baker

A play for solo actor. An elderly gentleman tells witty and dramatic stories of his experiences as a Civil War steamboat captain. Based on the memoirs of Julius Augustus Lemcke.

Cast:
JULIUS AUGUSTUS (“GUS”) LEMCKE, a businessman, age 76, with just the merest touch of an accent lef tover from his youth in Germany.
Life Support and Other Plays
by Donald E. Baker

SIX 5- TO -30-MINUTE MONOLOGUES AND TWO-HANDERS about the gay experience, most with roles for actors over 40. (All are available separately.) Includes:

Life Support (10-minute two-hander) The same-sex lover and the homophobic sister of  a man on life support meet for the first time.

The Boys Across the Street (1-page monologue) An older white woman discovers an interracial same-sex couple are moving in across the street.

Dad and Uncle Mark (10-minute monologue) An older man remembers what he saw spying through a knothole when he was thirteen.

For a Man Your Age (10-minute two-hander) A gay couple discusses aging, flirtatious baristas, and the National Geographic.

Best Friends (30-minute two-hander) Confessing to an incident in a public restroom brings up old secrets and threatens a lifelong friendship.

Intestate (10-minute monologue) A 50-year-old gay man loses his partner and everything else to the COVID pandemic.

Ice Box Cake and the Man from Lima was produced by Stage Left Theater of Spokane as part of their Masterpiece Monologues: New Works festival and streamed on Facebook and Vimeo on October 8, 2021. Lynn Noel played Velma, Susan Hardie directed.

Intestate: A COVID-19 Monologue was published by some scripts online literary journal in their Issue 4: Outbreak.

Intestate: A Covid-19 Monologue was performed on May 3, 2021, by Mike Folie as part of Talking Horse Productions' Original Monologue Contest Season 2 and uploaded to Talking Horse's Facebook page and website.

Trade With Klan: A Play about Choices was published April 1, 2021, by Next Stage Press. https://nextstagepress.net/trade-with-klan-a-play-about-choices/

Panglossian Productions of Williamsburg, Virginia, produced a staged reading of Grand Dragon in Power and uploaded a recording of it to their Facebook page, November 28, 2020