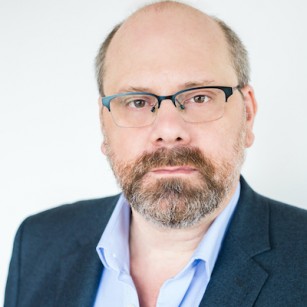 David Cote is a playwright, librettist and arts journalist based in New York City.

His plays include Saint Joe, Otherland and Fear of Art. Otherland was a finalist for the Eugene O'Neill Theater Center's National Playwrights Conference.

David’s other operas include We’ve Got Our Eye on You with composer Nkeiru Okoye. David co-wrote the text for Okoye’s Black Lives Matter piece for baritone and orchestra, Invitation to a Die-In. His song cycles with Paterson, In Real Life and In Real Life II have been performed by soprano Marnie Breckenridge and baritone Jorell Williams, along with American Modern Ensemble. His choral works with Paterson, Did You Hear? and Snow Day, were sung by Musica Sacra and conducted by Kent Tritle on Eternal Reflections (American Modern Recordings). Cast recordings of Three Way and Blind Injustice were recently released.

His reporting and reviews appear in Observer, 4 Columns, American Theatre, and elsewhere.

Opera Three Way, with composer Robert Paterson, was produced by Nashville Opera and American Opera Projects, performed at the Tennessee Performing Arts Center and later at BAM in 2017. Individual acts from this anthology piece have been produced by Shreveport Opera and Orlando Opera.

Blind Injustice world premiere by Cincinnati Opera, July 2019. This opera, with music by Scott Davenport Richards, is based on the book Blind Injustice and was developed in association with the Ohio Innocence Project. Based on true stories of people who were wrongfully convicted and later exonerated.

Composer Robert Paterson and David Cote were commissioned to write a modern companion piece to J.S. Bach’s Coffee Cantata (1735). Cocoa Cantata is inspired by the modern-day politics of chocolate. World premiere in June 2020 in the Mostly Modern Festival in Saratoga Springs, NY.

David Cote’s opera with composer Stefan Weisman, THE SCARLET IBIS, headlined the 2015 PROTOTYPE, a festival for opera-theater hybrids. The opera ran to sold-out houses and was hailed by The New York Times as “an outstanding new chamber opera… a moving, intense and dignified creation.”

David Cote’s serious farce about roots, family and belonging, OTHERLAND, was a finalist for the O’Neill’s National Playwrights Conference in 2015. The play was commissioned and has been developed by Gingold Theatrical Group in NYC.