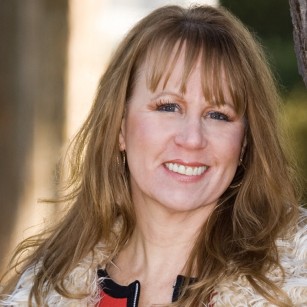 Cindi is a member of the Dramatists Guild and The Long Island Authors Group.

Over the last forty years, Cindi has been a professional children’s entertainer, dancer, choreographer, director, playwright, and theatrical agent. During this time she has performed in and/or directed more than ten thousand shows, including a summer-long dance concert sponsored by the city of New York. Performing at Lincoln Center was the highlight of her dance career. She has taught creative writing, playwriting, drama, dance, and fitness classes in many Continuing Education programs on Long Island.

Her short play, "To the Zoom and Back," was produced by Fishlicker Improv for Zoom in August 2020.  It won the audience choice award at Think Fast Theater Project 2021.  2nd Act Players produced it in 2021.  It is being published in "Borderless Thalia: A Multilingual Comedic Collection."

"No Rest for a Soul" was in the Equity Library Theater Festival," and "The Manhattan Repertory Festival."

She is also a respected theatre critic for "Patch.com," "Smithtown Matters," and "The Messenger Papers."

She graduated with honors from the University of Connecticut at Storrs, receiving a Bachelor of Fine Arts degree with a major in acting, directing, and playwriting.

Cindi is the author of "Grant Me a Higher Love," "Why Good People Can't Leave Bad Relationships," and "Confessions of a Reluctant Long Island Psychic."

Cindi has been named one of the Best Psychics on Long Island by "Newsday" and the "Long Island Press." She has thousands of Tarot card clients and many well-known celebrities are among her biggest fans. She has been heard on radio shows across the country. She is the host of her own radio show, which airs every Thursday night: www.blogtalkradio.com/higher-love. She has been a guest on the television show, "The Ladies Room," which airs on Long Island’s East End. She was also featured in Cablevision’s "Neighborhood Journal," the "Daily News," the "Reader’s Digest," "Huffington Post," "Your Tango," "Healthline" and countless other publications as well. Cindi is a relationship expert and gives workshops and seminars on a wide range of topics. 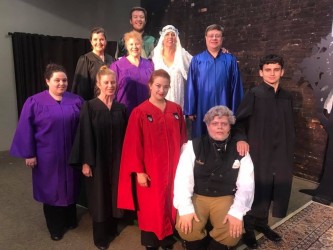 Beethoven’s Promethean Concerto in C Minor WoO. Following Aristotle’s principles of three unities, this Four Movement music drama takes place on August 6,1826, the fateful day when Beethoven's beloved nephew, Karl, shot himself in the head.  Beethoven, forced to review the soul record of his life, ponders the universal question that had plagued him, Hamlet, and all of humankind since the dawn of time: "To be or not to be?"  Yes, for any soul-searching being, this is always the question.

This is a story about great love – obsessive love for his nephew and for his “Immortal Beloved,” Josephine.  Countess Josephine von Brunsvik was Beethoven’s Soul Mate, more accurately his Twin Flame.  Like the star-crossed lovers in Shakespeare’s Romeo and Juliet, whose tragic love story continues to mesmerize audiences centuries later, the story of Ludwig and Josephine will fascinate today’s audience, as they witness what happens when a great love -- due to fear, convention, and class constraints -- falls apart. Many people self-destruct, and indeed, Beethoven went through periods of great angst and depression, but ultimately, this musical genius chose to use his passion and pain to create some of the world's most memorable music that is heard throughout the play.

Cast:
Ludwig van Beethoven, the master is 56 years old and gravely ill. Karl, Beethoven's twenty-year-old nephew. Chorus Members Egyptian Dancer Josephine, Beethoven's Immortal Beloved, who appears as an apparition, at the end of the play.
To The Zoom and Back
by Cindi Sansone-Braff

A 15 minute comedy about two lonely, lively senior citizens who meet on a dating site during the COVID-19 pandemic and decide to try a virtual date via Zoom.

An aging, down-and-out, one-time-Oscar-nominated Diva inherits a New Age business from her lateWiccan aunt and proceeds to wreck havoc on the metaphysical misfits who run the joint.

Two human beings hook up, and the following day, one of them shoots off a tirade of over-the-top texts, totally ambushing the other one.

No Rest for a Soul
by Cindi Sansone-Braff

An aging, one-hit wonder rock star has recently taken his own life. Now, as a Soul- in-Spirit, he is getting prepped to meet his maker, with the help of a Spirit Guide, known only as the Second Keeper of the Records.

Cast:
One man, 50, any race One character any race, gender, age
My Struggle
by Cindi Sansone-Braff

Set in 1981, the day after the failed assassination attempt of Ronald Reagan by John Hinkley Jr., the Sunnydale Nursing Home celebrates the hundredth birthday of their oldest resident, Dr. Abraham Kasper. A holocaust survivor, Dr. Kasper takes a disturbing trip down memory lane, as he laments the dire consequences of not listening to divine guidance.

Set in the Final Exit Bar and Grill, Chris gets an Evite to a Come-As-You-Are party that takes on a tragic twist.

Cast:
Two adults, any race or gender
The Karma Bums
by Cindi Sansone-Braff

An aging, down-and-out, one-time-Oscar-nominated Diva inherits a New Age business from her Wiccan aunt and proceeds to wreak havoic on the pack of metaphysical misfits who run the joint,  It's the classic fish-out-of water story,  or Monster-in-the-house story with Cathy Cloony-Colucci, a larger-than-life material girl, scheming her way through an over-the-top-spiritual world. 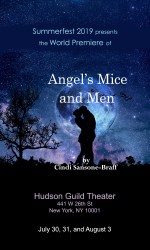 A full-length play in one-act

It was the summer of 1992, and Angel Ventura, or the widow Ventura, as her younger sister, Gina liked to call her, had the whole summer off from motherhood and teaching.  What is heaven's name would she do with it?

"The Karma Bums," a two-act, full-length comedy was a semi-finalist in Title Wave New Works Festival at Bay Street Theatre.

"Textual Abuse" is in the Spring 2022 Equity Library Theater Festival.

A monologue from "My Struggle" will be published in Smith and Kraus, Inc. "Best Female Stage Monologues of 2022."