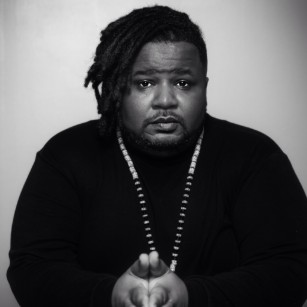 Bryan-Keyth Wilson (Playwright/ Director/ Producer/ Choreographer) Dubbed the Literary Prince by his colleagues, Bryan-Keyth Wilson is a trailblazer in theatre, screenwriting and directing. A native of La Marque, Texas, he studied Musical Theatre & Dance at Sam Houston State University in Huntsville, Texas under the tutelage of Penelope Hasekoester, Dana Nicolay, Dr. Cindy Gratz and the late Jonathan Charles and Dr. James Miller. In the fall of his first year as a Musical Theatre Major at Sam Houston State University, Wilson released his first play, No Ways Tired, during Experimental Theatre Night and received rave reviews from his peers and instructors. The success of No Ways Tired reinforced Wilson’s belief that God called him to be a writer. He has studied dance at The Alvin Ailey American Dance Theatre and The Martha Graham School of Dance while living in New York.

Bryan-Keyth has choreographed a number of shows such as Mame, Once on This Island, Dreamgirls and Suessical the musical, off-Broadway and in Regional Theatres across the United States. He has written, produced and directed two plays Off-Broadway, Pamlet and The Subway Series Pt 1. Bryan-Keyth is a classically trained actor, singer, and dancer who has traveled abroad, perfecting his craft over the years. He has published two novels, Hood Boy Chronicles and Track Changes & White Lies under his pseudonym, Brendan Gotti. Wilson served as a Teaching Artist in the La Marque Independent School District and served as director for the award-winning La Marque High School Cougarettes Dance Team. Currently, Wilson serves as a contributing editor for Broadway World and is the Founding Artistic Director of Artists In Motion Performing and Visual Arts Academy located in Kemah, Texas. Not only a Theatre and Television guru, Bryan-Keyth has developed and molded the careers of many young musical theatre and commercial music artists.

The Rose of Sharon - 10 Minute play
by Bryan-Keyth Wilson

Sharon Watson is professional opera singer/ graduate student who moves home with the hopes of finishing her education and finding a soul-mate. Love is a splendored thing but she soon finds it to be a gamble with many complexities. 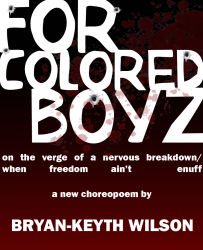 FOR COLORED BOYZ on the verge of a nervous breakdown/ when freedom ain’t enuff is an unabashed display of blackness that's unapologetic and speaks to the human heart from a black man's perspective. FOR COLORED BOYZ brings social issues to the stage and addresses issues within the black community that is silenced. FOR COLORED BOYZ’s Afro-centric rhythms are the heart of this piece.  FOR COLORED BOYZ resonates with its audiences no matter their ethnicity or demographic, there is a common thread that brings us all together when sitting in the dark watching this show; to go forth with understanding and love.

FOR COLORED BOYZ on the verge of a nervous breakdown/ when freedom ain’t enuff is a collection of 34 poems telling the stories of black men from slavery to the present. This composition examines the dark realities of what it means to be a man of color in America. Wilson’s work delves into issues such as toxic masculinity, homophobia, systematic racism, mental issues, and police brutality. While there’s no linear narrative each poem is weaved together through music and dance making this piece a choreopoem. The choreopoem is performed by five nameless men only represented visually by their colors. They are The Man in Black, Man in Red, Man in Green, Man in Orange and Man in Blue. Other subjects examined in this choreopoem include colorism, racial stereotypes, the black family and politics. By the conclusion of Act II, walls are broken, and each man on stage takes a new right of passage giving reverence to the ancestors and affirming the bond of brotherhood is what they need to move forward in this world.