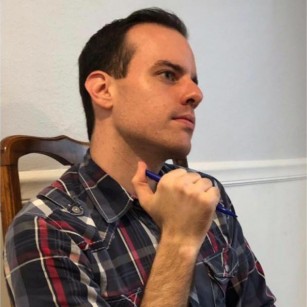 Brendan Bourque-Sheil is a writer of plays and personal narrative stories. His plays, including Sunrise Coven, The Book of Maggie, Dogrose Patrol, and Between Two Caves, have been produced in Houston (at Stages Theatre and The Landing Theatre Company) as well as New York City, Chicago, Cincinnati, and Ann Arbor. He has been named a finalist for the Reva Shiner Comedy Award, the Houston Press’s “Best New Play” Award, and Southwest Theatre Production’s “Plays With a Strong Female Lead” Competition. He’s also been named a Writer-in-Residence for The Writer’s Colony at Dairy Hollow. He has told personal narrative stories on PBS’s Stories From The Stage, City Cast Houston, Grown-Up Storytime, KPFT’s So What’s Your Story, Space Bar, The Gentle Hour and The Moth Houston Story Slam. He also teaches for the Kinder High School of Performing and Visual Arts and Grackle & Grackle Studios.

During World War One, the British government hired Girl Scouts to act as spies and couriers to protect King and country; this is the story of a troop who took their jobs way too seriously. Dogrose Patrol is a comedic whodunnit that follows a troop of teenage spies, as they investigate a mystery that calls into question where their true loyalties are.

Two things separate Buckstop, Texas from every other soon-to-be-ghost-town in rural America: its bizarre history with cults and a once great nurse practitioner named Hallie, whose going blind. When Hallie wakes up from a particularly epic bender to learn she has lost her nursing license, she forges a new way to practice medicine by teaming up with a local witch. As the coven grows in popularity, the practices of Medicine and Magic collide and coalesce into something entirely new that infuses the dying town with newfound purpose. But when the coven comes under fire, Hallie is forced to face some inner demons and sort out what she really believes before her own destruction spills over into the rest of the community. Sunrise Coven is a comedy about healers and healing.

A one-hour comedy thriller about modern conspiracy theory culture. Alex, the host of a successful podcast, is in the middle of a media storm, after hosting a controversial interview on her show, when Parker, an old friend from high school shows up at her door, to pitch her a wild story that he believes will launch both of them into the national spotlight. When Alex says no, the ensuing debate delves into conspiracy theory culture, mental illness, and how we engage with people who's interpretation of reality is fundamentally different from our own.

Cast:
The Book of Maggie

Judas Iscariot and Pontius Pilate, whiling away the afterlife as frenemies in the eternal Inferno, are offered a chance for redemption by a sci-fi-writing Saint Peter. The assignment? Teach a suicidal woman the value of life—before the whole world goes to Hell.