Katie’s works include Still Now, The Fault, One Night Only

Your play Still Now incorporates Butoh dance. What creative power do you find in combining forms like this?
The biggest changes in my life, like having my daughter, have been experiences that my mind simply could not fathom but that instinctively my body understood. I love theater that leads the audience into a similar experience of the unknown. To me, bodies on stage—and specifically Butoh onstage—points to the power of the unknown.

What is your writing process like?
I do a lot of thinking about space and form before I start to write. I like to set up a formal challenge for myself in each play. It might be a character who never leaves the stage, an absence of props, or a transformation that happens in full view of the audience. When I’m ready to write a first draft, I like to do it very quickly, in a week or so. I’ve found that if dawdle in my first drafts, it’s harder to maintain a cohesive vision for the piece.

You recently started Other Tiger Productions with your husband/collaborator Ricardo Vázquez. What drove you to do so and what has been most rewarding so far?
When we first met, Ricardo and I recognized a kindred energy in each othe—a similar relentlessness in the pursuit of excellence and a common desire to question, experiment and provoke. In our individual disciplines—him as actor and me as playwright—we thrill to work together, but have found ourselves confined by the limitations of our respective roles in a working room. In our private spaces, we have spent years dreaming about innovative methods of collaboration, visions of equity and inclusivity, and investigations into the purpose and gift of theater in this modern world. Through Other Tiger we get to enact our visions and see first hand where they succeed and fail. Through the process of our first large scale production—The Palabras Project—I think we grew decades both as artists and as partners. And through the process had the good fortune to work with 30+ artists and create the sort of theater that we want to see—every second of it challenging, triumphant, and deeply rewarding.

What is the weirdest phrase you’ve Googled when researching a play?
There are too many to pick one. The past few plays have led me to search for such gems as “how do you slaughter a bull,” “plant hermaphroditism,” “Quechua social structure,” “physics of hanging,” and “origin of the teddy bear.” Each search opens up its own series of rabbit holes. I love that. I do a lot of research, especially when I’m trying to do something sensitive, like write characters who are part of the indigenous Quechua community in Peru. For that, I started with a Google search, now I’m doing book research, and then I’ll conduct interviews. Another subject I’m obsessed with and have been exploring for years is how someone becomes radicalized. I’ve done quite a few searches on that subject. I’m sure I’m on a list somewhere. I’ve mentioned this to other writers who are sure they’re on a list somewhere too. I like thinking there’s a filing cabinet in an intelligence office somewhere dedicated to playwrights.

Benjamin’s works include Terra Incognita, at the very bottom of a body of water, q u e r e n c i a: an imagined autobiography about forbidden fruits

You’ve written a trilogy of “mortality­-themed plays.” What have you discovered about mortality in doing so?
That set of three plays was written following the passing of my father. The first one, Terra Incognita, addressed the question of “How do we commune with the dead?” I used the play to explore different interpretations of the afterlife and how I remained in relationship with the dead. That felt cathartic and essential. I wrote characters in those plays who are ghosts but could speak and interact with the world as if they were still alive. Those plays really cemented my sentiment that people leave their mark on others and the world in lasting ways. No one disappears completely. We all leave eternal footprints in time and space. I don't fear death the same way that I did as a child. In fact, I think I fear the process of aging more than death itself.

Marisa’s works include Reconciliation and Static

What will you be working on this year?
I will definitely be working on my musical this year—it’s about Ojibwe pirates who sail the lakes and rivers of Northern Minnesota in birch bark pirate ships and go to war against an evil mining company. I have a couple other plays I’ve started that I hope to finish first drafts of this year, too.

Why is mentoring other writers important to you?
I think it comes back to how important it has been in my life to have those in the theatre community—from when I was starting out to this very moment—extend a hand and believe in my work. That I have a voice. That I have important perspectives to share. This was and continues to be everything for me. It is the nourishment that keeps me going. And is something I want to provide and give to others. I do think this is an important part of being an artist—nourishing the next generation.

What were you like as a kid?
Over the weekend my dad took me out to the rez and we rode horses. I got to sit in front while he kicked his sneakers against the side of a white horse with a gray mane and tail. It took off so fast my little captain’s hat flew off. I told this story at show-and-tell on Monday. Reliving the story in front of my classmates was even more exciting than the original ride. That kid who had a thousand stories and never hesitated to tell them is the best I ever remember being and is my compass for knowing who I really am.

Francine’s works include The Good Mother, The Given, Late Fragment

What kind of stories interest you?
Almost all of my plays take place at the intersection of class tensions and sexual tensions. I love psychological thrillers. I’m a big fan of ‘70s films like Klute.

Reserve your free tickets for the Playwriting Fellows Showcase » 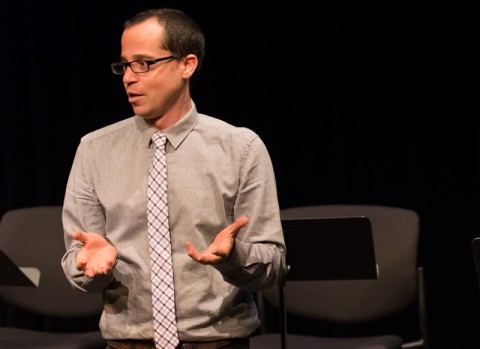