California Love seems like an homage to California. What inspired you to choose California as your subject for this play?

In California, we grow up understanding that we’re very blessed with weather, and that there are lots of pluses to our state—it’s the Golden State (though with the drought, it’s the dry kind of gold, too, now). I was visiting San Diego one weekend and saw a T-shirt logoed with “California Love”—I’m usually all about LA—but that’s when it hit me how in California you can travel to all different environments and landscapes—hike canyons, ski mountains, surf seas. That summer, as resident playwright at the Ojai Playwrights Conference, the love was confirmed: the warmth and the orchards, that spacious, wide open new feeling and all the generous support around new plays. Oh! And the surfing. Conceptual artist Jonathan Takahashi told me about Surf Crit, an art class he took at Cal Arts led by Keith Rocka Knittel where everybody would go surfing and talk about art, in situ, in the ocean. Usually artists talk about art in each other’s studios, a static space. I thought about the dynamic ocean, how conversations of conceptual ideas mixed with the buoying, the paddling, the elements. Then, as waves gathered and crested, actually having to move out of your head, surf, crash, and then re-paddle back up and continue the conversation, either jiggled up by the ocean, or starting another idea anew. Imagine four hours of convo like that, unending and relentless. During the Ojai residency, I had a week of mornings, and thought I’d try the concept out—wake early, sit on the patio and wait with pen and paper in a natural environment, with all of its humming, its buzzing, its stillness. And listen. Listen. Yeah the logoed shirt was there too—brown bear pacing a strip of green with a red heart hovering over it all.

One character is named Cali and seems like an embodiment of California. Were you playing around with parallels between place and person?

Oh definitely! In fact, all three of the characters’ names add up to California. Cali is the mature surfer lady. 4 is the mysterious surfer. Nio starts out Nio and then by the end he wants to be called Nia. Something happens in the ocean, some genital transfiguration. I don’t know! That’s the mystery part that [director] Lisa [Peterson] and I are going to approach eventually. Another thing in the play is a sensitivity to the East Coast version of Californians. A friend of mine loves that Saturday Night Live skit that laughs at the Californians. They all look like dried up porno stars. And they’re like, “Yeah I took the 405 to the 5 to the 118 to the 210 to the 2…,” and it’s true that Californians speak kind of airily, but I did want to address the mockery that the East Coast has of the West Coast and see if I could write a piece with that California tone, but have more sublime topics. Content that’s not so vapid, that works with the airiness. I wanted to embody what a California play is.

Can you talk about the process of writing this play?

I wrote it by hand. It was really important in this process—when you’re waiting for a play, when you’re listening for a play—that it’s not too fast. That ink is slow. That ink is being warmed by your blood and slowly rolls across the paper. From there, a “transfer edit”—when you type the handwritten pages into the computer and you get to expand the ideas that were just a flash on the page, that you weren’t aware of while writing. You also get to cut stuff that keeps repeating or writing that is just bad. That’s one of the processes I love in writing. You can take the raw material and organize it a bit better on the page—stage the page, as my mentor Paula Vogel would say.

This play I didn’t have to change that much. I wrote more slowly and carefully than usual. But the sounds and environment lulled me into a trance of language. The play works very elliptically, so putting in too much information would cause a collapse and betray its organic endeavor. When I was re-typing it into the computer, the big discovery was that the play had so much to do with loss. It was a weird LA cliché for me: I was so attached to my car, it was like 28% of my personality. It had been the container of how many of my emotional states, how many karaoke performances singing along with the radio. Having to get rid of it, it felt like more than a machine. The old 2001 beige Toyota Corolla was starting to rattle and burn oil, it was on its last leg; it was also the year right before my father passed away. He had cancer, and his body was slowly deteriorating. Through Cali and her relationship to her car, I was paying homage to the car, but deep down starting to prepare myself for dis-attaching from my father.

I feel lucky to be a playwright. I put in thousands of hours and yield lines of dialogue, fragments, scenes, drafts—sometimes it’s a play, sometimes it’s an intense diary entry, sometimes it’s nothing. But I am expert in getting at the thing that is knocking at my brain and trying to work it out in a play. And then, there are milestones in your life, when you need to express something that you don’t know how to express, and suddenly all the skills, all the discomfort of sitting with mystery and unpacking your own psyche, it’s there to guide you towards documenting a difficult moment. Sometimes the content is inconsequential—it’s the act of expression that is important, to do it and not judge and not make sense of what is right in front of you, and just coexist with it. Be with it. Figure out what it means later. Difficult stuff doesn’t know how to be eloquent about itself instantly.

Writing a play about surfing helped me to face ultimate loss. I certainly didn’t know this when I started the play. The loss of a parent is so primal. A parent who is so different from yourself. A parent who is an immigrant. His cultural fabric and understanding and the way he sees life was just so totally opposite of mine. Being a Chinese man who had sailed to America, he made a great life here. He studied hard, he was industrious, he followed the rules and he got rewarded. He got to live the American dream. I grew up in the Valley—my priority was fun and freedom. Individuality. Rebellion. We’re such different creatures, but somehow, through this play, I just… I think that there’s something about going into the water—there’s going to be a time when the person doesn’t come back up. All of those things started to fall into place as I was typing it. Lisa knew me when I had that car; she had lived in LA and we were together during that decade I call the Golden Era of the Taper, with all the labs, with Luis Alfaro, Chay Yew, and a bevy of awesome theater makers. She called her car “Blue Magic,” this boxy blue Honda Civic. This play is about the loss, but it’s also so much about defining California outside of the New York lens. Seeing the label from origin eyes.

You mentioned that you “stage the page” when typing it. And looking at your script, the way it’s laid out, you certainly get a sense of the rhythm, the emphasis, the tone.

Yeah, even down to font choice. And space on the page. There are pages that are so spacious and there are pages that are so crowded. I also think about the idiolect. There’s this concept of the idiolect—the part of your intellect where your language sits. I’m not really literate in Chinese, but I have “family Chinese.” I have Chinese on the brain in a family way, you know. In Chinese, it’s so much about tones, sounds, and that’s probably where I’m liking to rhyme things or liking to pivot things on homonyms, on words that sound similar. I think that that directly has to do with the Chinese that sits on my brain. So puns are not just punch lines, they are pivots. Words that sound the same, but have completely different meanings. A contextual comprehension of stuff versus a direct definition.

One of the things I love, not just in this play, but in a lot of your plays, is the specificity of language that’s almost like poetry. Do you have a background in poetry? What inspired you to become a writer?

I became a playwright because of the First Amendment. I wanted to be able to use all facets of freedom of expression. I thought that’s what made us Americans. Writing also helped make sense of the contradiction of growing up in a Chinese household but being schooled in American thought. My life was really really saved when I discovered the Hegelian Triangle—thesis and antithesis fusing to become a synthesis above the original plane—in the way that core values of the Asian and American cultures are pretty oppositional. Asian values are patience, long-suffering, family. In America it’s instant gratification, pleasure, the individual. I suffered from what I felt was a cultural schizophrenia. The Hegelian Triangle inspired me to fuse the oppositional values and arrive at a new synthesis point. And I think that’s what my plays are. I’m always trying to get to that new point that’s not on the dichotomy but is above that plane. A bat is neither mouse nor bird. A bat is a flying hybrid.

Things that seem very obvious to me because of the hybrid thing—having one foot in Chinese culture and one foot in American—aren’t always obvious to either the Chinese or the Americans. I went through this five-year period, tearing my hair out trying to figure out “what is Asian American?” And then, with the epiphany of the Hegelian Triangle I got it. The true definition of Asian American is: the Asians don’t quite get it, and the Americans don’t quite get it. My bicultural friends and I, there’s this stuff we don’t even know how to articulate, but we just know because of the fusion of contradictions.

I think about Anna Deavere Smith’s notion of language and character, that a character is not just what they say, but how they say it. And the notion that poetry, like in Shakespeare, is a more heightened consciousness. There’s something about plays where the attention, the distillation of language, works much more like poetry than like prose. In poetry, you’re really concentrating on the words, the order of the words, to coalesce a moment. I think that plays are like that too. It’s three-dimensional writing: there’s something else happening off the page. There’s another aura around it, beyond words, that is also working to communicate. 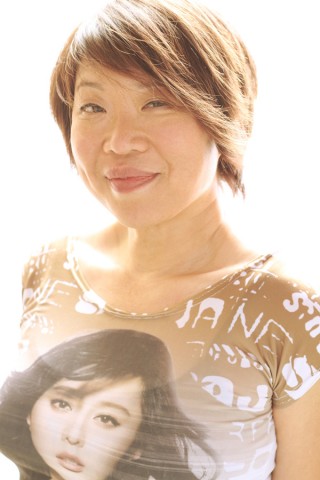